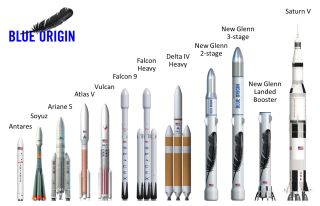 Billionaire entrepreneur Jeff Bezos announced this morning (Sept. 12) a massive new reusable rocket family in development for his private spaceflight company Blue Origin. The rocket, called New Glenn, will be used to launch satellites and people into space, according to Bezos.

In a newsletter from Blue Origin, Bezos unveiled an artist's concept of two- and three-stage versions of the New Glenn rocket. Both will stand taller than SpaceX's Falcon Heavy and United Launch Alliance's Delta IV Heavy, and the three-stage approaches the stature of NASA's Saturn V that boosted humans to the moon.

The New Glenn rockets are named for the first American to orbit Earth, John Glenn, and the design draws on what Blue Origin has learned from its reusable booster, New Shepard. That rocket has successfully launched into suborbital space and landed four times from West Texas since November 2015. New Shepard's next test, announced Sept. 8, will be an in-flight abort test to eject the rocket's crew capsule. (New Shepard is named for Alan Shepard, the first American in space.) [Blue Origin's Private Spaceships in Photos]

New Glenn is a step forward in bulkiness and range, and its three-stage version will be able to fly missions beyond low-Earth orbit, Bezos said.

"New Glenn is 23 feet [7 meters] in diameter and lifts off with 3.85 million pounds of thrust from seven BE-4 engines," Bezos wrote in the statement. "Burning liquefied natural gas and liquid oxygen, these are the same BE-4 engines that will power United Launch Alliance's new Vulcan rocket.

While New Shepard launches from Texas, New Glenn will launch from Launch Complex 36 at Cape Canaveral Air Force Station in Florida, which hosted launches of Atlas rockets from 1962 to 2005. Blue Origin just broke ground on a 750,000-square-foot [70,000 square meters] rocket-manufacturing facility nearby for New Glenn. Bezos said that the new rocket should launch for the first time within the decade.

"Our vision is millions of people living and working in space, and New Glenn is a very important step," Bezos said. "Up next on our drawing board: New Armstrong," Bezos teased, referencing Neil Armstrong, the first human to walk on the moon. "But that’s a story for the future."