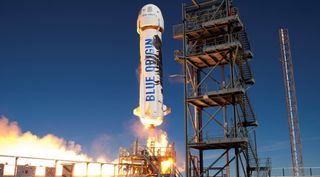 TITUSVILLE, Fla. — Blue Origin plans to conduct the next flight of its New Shepard suborbital vehicle in October, a launch that the company's founder says will test the vehicle's abort system.

In an email update Sept. 8, company founder Jeff Bezos said the upcoming New Shepard flight, planned for the first half of October from the company's West Texas test site, will be an in-flight abort test, where the crew capsule will fire its abort motor to fly away from the propulsion module during the launch.

"We'll intentionally trigger an escape in flight and at the most stressing condition: maximum dynamic pressure through transonic velocities," Bezos wrote. That will be about 16 seconds after liftoff, at an altitude of nearly 4,900 meters. [Photos of Blue Origin's latest launch and landing]

The test, Bezos acknowledged, will likely destroy the booster module, which has flown four previous New Shepard launches dating back to November 2015. "The booster was never designed to survive an in-flight escape," he wrote. "The capsule escape motor will slam the booster with 70,000 pounds of off-axis force delivered by searing hot exhaust. The aerodynamic shape of the vehicle quickly changes from leading with the capsule to leading with the ring fin, and this all happens at maximum dynamic pressure."

However, simulations suggest it may be possible for the booster to survive the test and make a powered landing. "If the booster does manage to survive this flight — its fifth — we will in fact reward it for its service with a retirement party and put it in a museum," he said.

Blue Origin lost the first New Shepard propulsion module during a test flight in April 2015, when a hydraulics problem prevented the vehicle from making a powered landing. Several propulsion modules, which contain the BE-3 engine that powers the vehicles, were under construction during a visit to the company's headquarters and factory in Kent, Washington, in March.

The test flight will be the first for Blue Origin since June 19, when the vehicle made its fourth consecutive successful launch and landing. Company officials had said at the time that they planned to increase the pace of test flights in the coming months, but had not disclosed the schedule for this test prior to Bezos' email.

In addition to New Shepard, Blue Origin has been working on an orbital launch vehicle system, few details of which the company has released. Bezos said Sept. 8 that a future update would provide more information about that vehicle.

That vehicle will be built at a factory at Cape Canaveral, construction of which recently started. On Sept. 6, the U.S. Air Force filed a permit application with the St. Johns River Water Management District, which provides environmental oversight of projects in the region, for work on SLC-36, the site Blue Origin announced last year it would redevelop for launches of the orbital vehicle.

The application also referenced SLC-11, an older launch pad not previously connected with Blue Origin. That pad was last used for launches in the mid-1960s. The application provided no additional information about the use of SLC-11, but said that it and SLC-36 would be redeveloped to include "infrastructure to test engines, integrate launch vehicles, and launch orbital vehicles, as well as support systems to recover and refurbish launch vehicles."