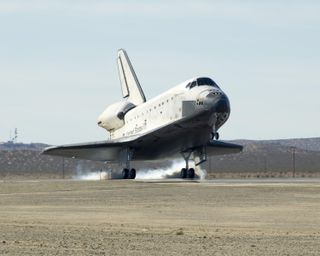 WASHINGTON — NASA's suppliers for Artemis are working together more closely as the agency accelerates its moon plans to land humans on the surface by 2024, company representatives said.

Speaking on a panel here at the International Astronautical Congress Wednesday (Oct. 24), representatives explained how lunar projects compare with their previous work for NASA. Many of these companies took part in the space shuttle program as well, but representatives said they are pursuing avenues such as more cooperation between contractors. For example, the subcontractors all work together rather than getting separate agreements from the prime contractor that leads the project.

"Because of the acceleration of the schedule, we work far more as a team," said Victor Alfano, senior director of strategic programs at National Technical Systems. The company tests parts of the Orion spacecraft, such as sensors and valves, to make sure they will stand up to the rigors of launch. "It's quite helpful and encouraging to have that kind of relationship, not just with the prime [contractor], but all customers are working together," he added.

"For us, the relationships you build with the primes [prime contractors] is really important," added Kevin Bowling, senior vice president of Major Tool & Machine, a company that tests the RS-25 engines on the Space Launch System (SLS) rocket that will launch astronauts on moon missions. "We build difficult hardware with a lot of strict requirements, and things don't always go right the first time … so we are solving problems together to be successful."

Unlike during the shuttle program, which generally ran without strict deadlines outside of individual launches, NASA is marshaling its resources to meet the 2024 deadline set by President DonaldTrump's administration.

The agency is working hard to make sure that components ranging from spacesuits to rockets are ready in time. But NASA Administrator Jim Bridenstine has said the agency is emphasizing safety as it works through the milestones for Artemis. Artemis 1, an uncrewed mission that will fly around the moon, is expected to fly in 2020 with the first human test mission following shortly afterward.

During the panel, a representative from Smiths Interconnect emphasized that many of the companies working on Artemis have an advantage: They can draw on decades of spaceflight experience to reach the moon-landing goal. "There's a lot of building that is going on, on previous lessons learned," said Gina Prieto, director of key accounts. "I think that's an important factor."

Smiths Interconnect supplies connectors and cables for multiple industries; for Artemis it is providing the data network running through the Orion spacecraft. Prieto said that they are taking what they are learning from Orion and applying it to other customers that they are working with. "It's the same way, really, with all of our technologies. We build on what we know and make it better," she said.

Company representatives said that one of the best ways to implement those lessons is by employing people who were involved in the space shuttle program, transferring their expertise to Artemis. After the end of the shuttle program left workers unemployed, Crossworks Technologies picked up a few of them to work on its own projects.

Today, Crossworks is working on operations support at the Kennedy Space Center, under a contract from Jacobs Engineering Group Inc., which provides technical services and scientific consulting (among other business lines) for multiple kinds of clients. "We're able to take the legacy systems of the shuttle program and transition them," Crossworks president and CEO Wayne Cross said —  in part due to the people he hired when the shuttle was retired.

"We're not going to take experience that's left behind, and leave it behind to wane," he said. "I'm proud we could put it forward."