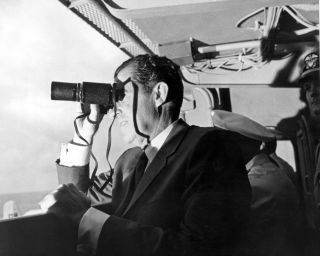 President Richard Nixon was waiting on the rescue ship USS Hornet for the return of the Apollo 11 crewmembers.
(Image: © NASA)

Space historians call it "the contingency speech." It's a poetic 1969 presidential tribute to the Apollo 11 crew in case they were somehow stranded permanently on the moon after their epic landing 50 years ago this week.

The trio of astronauts did make it home safely — but fortunately for history, the speech survives. "Fate has ordained that the men who went to the moon to explore in peace will stay on the moon to rest in peace," the speech, written by president Richard Nixon's speechwriter William Safire, said in part. While it left open the possibility of humans returning to the moon, the speech said the loss of astronauts Neil Armstrong and Buzz Aldrin would be mourned by all — and we would always remember "there is some corner of another world that is forever mankind." (Since Michael Collins remained in the orbiting command module, it was expected he would make it home.)

As people around the world prepare to celebrate the moon-landing anniversary on July 20, these words serve as a somber reminder that spaceflight is dangerous and that mistakes bring consequences, space historians told Space.com.

Many astronauts and cosmonauts have paid the ultimate sacrifice before and after Apollo 11. Each year, the United States holds a Day of Remembrance ceremony to mark the deaths of spacefliers, including the crews of Apollo 1 in 1967, the Challenger space shuttle in 1986 and the Columbia space shuttle in 2003.

NASA is preparing to return to the moon in 2024, as President Donald Trump's administration directed in March, four years earlier than the previous plan. That accelerated timeline means the agency must remember the lessons of the past to prepare for a safe landing in the future, collectSpace founder, Space.com contributor and space historian Robert Pearlman told Space.com.

"If it's the latter," he continued, "you may be inadvertently increasing the risk of losing astronauts' lives, and that should be something that is always on the mind of politicians who set dates like 2024. It's not just about, 'We need a political victory,' or, 'We need a motivation factor for the space program's workforce,' but, 'Can we safely do this? Can we safely move the deadline — the target date in 2028 — to a hard deadline of 2024?'"

Pearlman pointed to the July 10 exploration-program shakeup at NASA that included reassigning Bill Gerstenmaier, who had led the agency's human spaceflight programs since 2005. "He is very well respected as a leading engineer in the aerospace field," Pearlman said, "and so the question is, why was his reassignment necessary? And was it based on his raising objections out of safety or a technological basis, or was there some other motivation?"

In a phone message left with Space.com in response to Pearlman's comments, NASA Administrator Jim Bridenstine said that "safety is our absolute highest concern." To that end, Bridenstine said, NASA continues to follow the recommendations of the Columbia Accident Investigation Board. This group examined the fatal space shuttle incident in 2003 and identified technical and managerial causes behind the incident.

An independent technical authority with a different reporting structure can stop work on any project at any time within NASA, Bridenstine said, adding that "the rest of the NASA workforce" has a voice. He said that NASA is working to make sure the cost of the lunar missions and the 2024 schedule are realistic and preserve the astronauts' safety.

"Just know, in no way does NASA intend to mitigate safety at all when it comes to meeting the objective," he said.

As for Gerstenmaier, Bridenstine described him as "a great American who has done great work for our nation and our country." But the cost and schedule challenges of the 2024 human lunar mission that falls under Gerstenmaier's purview, Bridenstine said, have been well documented in reports from NASA's Office of the Inspector General, as well as the U.S. Government Accountability Office.

"I want to get that back to a day where we have realistic cost and schedule plans and we meet those plans," he said.

In a recent interview with The Washington Post, Bridenstine said he felt a change in leadership was necessary to meet the 2024 goal, while adding that there was no tension between himself and Gerstenmaier ahead of the reassignment.

The Apollo 11 contingency speech came about weeks before the mission's launch, when an Apollo 8 astronaut raised concerns at the White House about the possibility of disaster. That astronaut was either Frank Borman (according to Safire in a 1999 New York Times article) or Bill Anders (according to former NASA chief historian Roger Launius).

The Apollo 8 astronaut was particularly worried about what could happen if the astronauts were stranded on the surface, Launius told Space.com. "It's one thing to die in a blaze of glory in an explosion, and it's another if you [slowly] run out of oxygen," he explained.

The contingency speech didn't receive widespread attention until after Jim Mann, then a journalist for the Los Angeles Times, found a copy in the National Archives in 1998. Mann published a story about the speech in 1999, just in time for Apollo 11's 30th anniversary, and Safire wrote a response in The New York Times the same year.

"I haven't thought about that macabre planning for three decades," wrote Safire, who died 10 years later, shortly after the 40th anniversary of Apollo 11. Safire lamented that in the 17 years after Apollo 11, "we took space triumph for granted. Terrible risks were largely ignored — until the Challenger spacecraft blew up for all to see in classrooms and living rooms."

Then, it fell to President Ronald Reagan to deliver his own disaster-response speech, on Jan. 28, 1986, on national television. But this time, nobody in the White House had prepared remarks in case of disaster, said Safire and Launius. Speechwriter Peggy Noonan put one together in hours, which ended by quoting part of a famous poem by aviator John Gillespie Magee Jr.

"We will never forget them," Reagan said, "nor the last time we saw them, this morning, as they prepared for their journey and waved goodbye and 'slipped the surly bonds of Earth' to 'touch the face of God.'"

The Columbia tragedy on Feb. 1, 2003, prompted a tribute speech from President George W. Bush, but he gave these remarks days later, at the crew's funeral in Arlington National Cemetery in Arlington, Virginia, Launius said. The historian added that NASA always has a generic statement prepared in case of crew tragedy, which can be quickly modified for the particular circumstances.

So, why the focus on having a presidential speech ready in 1969 for Apollo 11? It's unclear, but perhaps the intense international attention on the crew was a motivating factor. "It's part of the Boy Scout model — be prepared," Launius said of the 1969 speech, "and in this particular case, they were. But they were only prepared for one contingency."

Contingency plan for Apollo 13, too

But Pearlman learned of a second presidential Apollo contingency statement earlier this year. The package Pearlman encountered includes memos planning for failures, as well as draft responses to public messages about Apollo 13's success or failure, all available through the Richard Nixon Foundation's website.

The command module spacecraft of Apollo 13 experienced an explosion en route to the moon in 1970, and Nixon's administration worried about the odds of the crew's safe return. (Luckily, the contingency plan was not needed, as the crew safely splashed down days later on April 17, 1970.) Pearlman heard of the plan from Michael Beschloss, an NBC News presidential historian. Beschloss published one of the presidential staff memos on Twitter on April 16, during the 49th anniversary of the Apollo 13 mission.

"I have talked to Frank Borman concerning a contingency plan for Apollo 13 in case of a disaster," Nixon special assistant Dwight Chapin wrote on April 15, 1970 — two days after the explosion, while the astronauts were still coming home.

"It is Frank's feeling, and I concur, that the president should leave for Houston immediately upon word of a disaster," the memo continues. The plan (in part) called for Nixon to visit mission control in Houston, then visit the spouses and children of Mission Cmdr. Jim Lovell and lunar module pilot Fred Haise at their houses in Houston.

Command module pilot Jack Swigert was a lifelong bachelor, but his parents were excluded from the contingency plan. "Frank does not see any reason why the president should have to go to Denver to see Mr. and Mrs. Swigert," the memo said. Pearlman said he was curious why Swigert's parents appeared not to be in Houston during their son's first space launch.

But overall, Pearlman said, the memo is perhaps of more interest to presidential historians than space historians, because it "does provide an insight into the way that Washington and the White House thinks when it considers activities like this."

He added that there was a very specific reason that John F. Kennedy, when first announcing the moon-landing goal, at a special joint session of Congress on May 25, 1961, said the objective was not only "landing a man on the moon" but also "returning him safely to the Earth" by the end of the decade.

"For some people, that is a throwaway," Pearlman said, "but it wouldn't be a success if [the astronaut] didn't return home safely. That's a consideration any president has faced, or will face in the future, [when] sending astronauts into an unknown and dangerous situation."