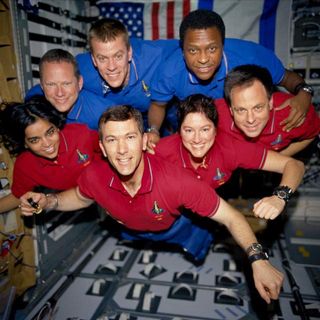 The seven astronauts killed during the 2003 loss of NASA's space shuttle Columbia survived less than a minute after their spacecraft began breaking apart, according to a new report released Tuesday that suggests changes to astronaut training and spacecraft cabin design.

The 400-page "Columbia Crew Survival Investigation Report" released today states that Columbia's ill-fated crew had a period of just 40 seconds between the loss of control of their spacecraft and its lethal depressurization in which to act on Feb. 1, 2003.

The crew's response was hampered by delays in donning their re-entry pressure suits, which ultimately would not have saved them during the searing plunge into the atmosphere anyway.

"The Columbia depressurization event occurred so rapidly that the crew members were incapacitated within seconds, before they could configure the suit for full protection from loss of cabin pressure," the report states. "Although circulatory systems functioned for a brief time, the effects of the depressurization were severe enough that the crew could not have regained consciousness. This event was lethal to the crew."

One of Columbia's STS-107 crew members was not wearing a pressure suit helmet and three astronauts had not put on their spacesuit gloves, according to the report. At no point did crew error contribute to the loss of Columbia, which was not a survivable event, the report states.

The design of Columbia's seats, too, decreased the crew's chances of survival as their restraints did not lock in place, subjecting the astronauts to extreme trauma from rotational forces. Their helmets were not head-conforming, resulting in injuries and lethal trauma, the report states.

The investigation "was performed with the belief that a comprehensive, respectful investigation could provide knowledge that would improve the safety of future space flight crews and explorers," said the team of astronauts, pilots and engineers that compiled it.

The report found five separate lethal events that occurred during Columbia's descent. It calls for enhanced astronaut training to help spacecraft crewstransition from emergency response to survival mode. It also recommends that NASA design the seats and pressure suits for future spacecraft with loss of vehicle control in mind.

Current astronaut pressure suits, for example, require astronauts to manually deploy their parachute during an emergency escape. Modifying the system to automatically close visors or deploy a parachute could help an unconscious astronaut's chances if they survived a spacecraft's catastrophic descent.

Columbia broke apart during reentry while returning to Earth after a 16-day science mission. Investigators later found that a piece of shuttle fuel tank foam insulation punched a hole in the heat shielding that lined Columbia's left wing edge during its Jan. 16 launch. The damage allowed superheated atmospheric gases to penetrate the spacecraft's wing during re-entry, destroying the shuttle and killing the crew 16 minutes before their planned landing.

Once the spacecraft's cabin began breaking apart, Columbia's crew had no protection against the searing heat of re-entry outside, the report states, adding that the bright orange pressure suits could not withstand such conditions.

"The ascent and entry suit had no performance requirements for occupant protection from thermal events," the report states. "The only known complete protection from this event would be to prevent its occurrence."

NASA resumed space shuttle flights in 2005 and has since flown 11 missions to the International Space Station.

The agency plans to fly nine more shuttle flights before retiring its three-orbiter fleet in 2010 to make way for its replacement, the capsule-based Orion spacecraft and its Ares 1 booster. That spacecraft is expected to begin operational flights in 2015.