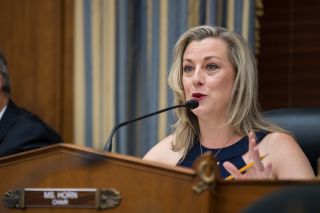 Kendra Horn (D-Okla.), chair of the House Subcommittee on Space and Aeronautics, speaks during a hearing at the Rayburn House Office Building in Washington, on July 10, 2019.
(Image: © Aubrey Gemignani/NASA)

When planning for human moon landing missions in the 2020s, NASA needs detailed budgetary estimates to get a better chance of securing congressional support, Rep. Kendra Horn,  chairwoman of the House Subcommittee on Space and Aeronautics, said in an exclusive interview with Space.com.

The subcommittee recently marked up NASA's fiscal year 2021 bill, which is supposed to ramp up funding in preparation for a mission to land astronauts on the moon in 2024 as a part of the agency's Artemis program. The White House's budget request includes a 12% increase in NASA's total budget, putting its cap at around $25.2 billion. The biggest line item on the wish list is $3.37 billion for the crewed lunar landing system, according to NASA Administrator Jim Bridenstine's State of NASA speech last week..

The subcommittee introduced several large changes in its version of the bill, including pushing back the moon landing deadline to 2028 (giving NASA the option to go earlier if it has the appropriate resources) and asking for NASA to take more control of the moon lander's design. NASA has expressed worries that the commercial partners would not be involved enough, but Horn said the subcommittee made that decision after hearing testimony from Apollo 10 astronaut Tom Stafford in November 2019.

In his testimony, Stafford spoke of the success of the first Apollo moon landing in 1969 (that of Apollo 11); the moon landings continued through Apollo 17 in 1972, with some design changes made after a serious explosion in space during Apollo 13 in 1970. His written statement did not mention Apollo 1, whose crew died in a launchpad fire in 1967 in part due to faulty communication between the agency and its contractors, prompting changes in communication. But Stafford did say close relationships with contractors were key to NASA's ability to put humans on the moon in the 1960s and 1970s.

"He said the thing that allowed NASA to be successful in the Apollo program was that you had NASA right there in the center," Horn told Space.com. "You had the engineers, the administrator, the technical experts [and] the astronauts, working side by side with contractors."

The new moon landing effort also will require more details on how money will be spent  in budgetary line items, Horn said, considering the troubled history of NASA's Commercial Crew Program. Two Commercial Crew companies — SpaceX and Boeing — were selected in 2014 to provide spacecraft to ferry astronauts to and from the International Space Station; at the time, NASA said the companies were expected to have at least one commercial vehicle ready by 2017.

It's now three years past that deadline, and neither vehicle has launched humans to space, although both companies are in the final testing stages and flew uncrewed orbital flights in 2019. SpaceX's Crew Dragon safely reached the International Space Station during an uncrewed test flight in March 2019, and the company is getting ready to launch its first astronauts in May. However, multiple software errors prevented Boeing's CST-100 Starliner from accomplishing the same feat in December.

NASA "has been chronically underfunded; that's one of the reasons things have taken a long time," Horn said. She also pointed to other factors, such as overly optimistic cost assessments (including criticism of the NASA Office of Inspector General in 2019) and "challenges unseen," referring to developmental issues the companies encountered.

"We know things are going to change," Horn said of NASA's Artemis plans, because many of the big pieces are still being developed — for example, the Space Launch System rocket and lunar spacesuits, both of which haven't been tested in space.

The subcommittee asks NASA for feedback and plans, and those details help the subcommittee present the budget to Congress to "ensure that NASA can get the funding it needs," Horn said.

In October 2019, Bridenstine told the House Appropriations Committee that NASA doesn't have the line items ready yet. Several members of that subcommittee repeatedly asked Bridenstine for detailed cost estimates, saying they can approve more money only if they know what that funding would be used for.

Bridenstine said the 2024 moon landing deadline is good for NASA because proceeding with the plans safely while political support is in place will give the agency a better chance of success than pushing out the deadline would. That's because long lead times killed similar moon landing efforts under the Bush administrations in the 1990s and early 2000s.

But moving past 2024 would mean the moon landing happens after the Trump administration leaves the White House, regardless of whether the president is reelected. And it's still unknown which political party will control the White House, and thus NASA's efforts, at that time. When asked if the moon effort could persist under a new administration or a different political party, Horn said the bill's bipartisan support in her subcommittee gives it a better chance of continuing.

"This is a story that isn't told nearly enough, which is that this was a true bipartisan effort," Horn said of her subcommittee's work. "We worked together … in a way that was intentional, and we took our time. We did that, and we wanted to get that right."

The subcommittee's goal, she said, is to provide a bill with "certainty and longevity," and she noted that it's up to NASA to do the same. NASA's plans changed rapidly during the budget negotiations for fiscal year 2020, she added. In a span of just three weeks in 2019, she said, the Trump administration requested a 2024 landing effort, even while the NASA budget was in the process of being approved.