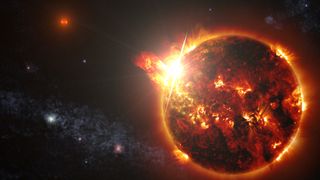 Astronomers may have spotted a distant star spitting out a giant flare that packed 100,000 times more energy than any seen from Earth's sun, a new study finds.

The researchers also said they've made the first clear detection of a remote star emitting a kind of eruption known as a coronal mass ejection that were until now only seen from our sun. Such explosions may wreak havoc on any surrounding worlds, lead author Costanza Argiroffi, an astrophysicist at the University of Palermo in Italy, told Space.com.

Scientists are most familiar with the dynamics of our own sun. Solar flares are the largest explosions in Earth's solar system. Our star unleashes these intense bursts of radiation when magnetic energy that builds up in the sun gets suddenly released. The blasts can endanger satellites or astronauts in orbit.

Often, solar flares are accompanied by the release of giant bubbles of stellar material, and these are the coronal mass ejections. These eruptions are the most powerful magnetic events on Earth's sun, blasting out up to 44 billion tons (40 billion metric tons) of superheated plasma, or clouds of electrically charged particles. One of the fastest recorded coronal mass ejections, detected in 2012, raced across space at up to 7.92 million mph (12.75 million km/h).

Scientists have suspected that both of these phenomena occur on other stars as well. Astronomers have spotted brief spikes in average stellar brightness that they believe represent flares. Researchers have also found that other stars could prove up to 10,000 times more magnetically active than the sun, suggesting that they could burst with coronal mass ejections many times stronger than ones seen from the sun.

However, until now, astronomers had not detected any coronal mass ejections from another star, because researchers could not resolve any details on the surfaces of stars.

The researchers focused on HR 9024, a yellow giant star nearly three times the mass of Earth's sun located about 455 light-years from our planet. Using NASA's Chandra space observatory, they analyzed X-rays from the star's plasma, which was a searing hot 7.2 million degrees Fahrenheit (4 million degrees Celsius).

The scientists found that light from HR 9024 shifted in frequency in a manner that suggested hot plasma was moving up from and down toward the star's surface. (That change would register in the X-ray data in a phenomenon similar to the Doppler effect, which causes an ambulance siren to sound higher-pitched as the vehicle drives toward you and lower-pitched as it moves away.) The researchers suggested that this was evidence of a coronal mass ejection from the star.

The researchers estimated that the coronal mass ejection blasted out about 1.3 million billion tons (1.2 million billion metric tons) of material, a little less than one-quarter the average mass of Earth's atmosphere. The team suggested that the ejection released about 5.2 trillion quadrillion joules of kinetic energy, or about 80 trillion times the amount of energy released from the atomic bomb dropped on Hiroshima and about 100,000 times more energy than seen from the strongest known flares from our sun.

But in general, all these detected qualities "neatly agree with predictions based on flare modeling, proving that our understanding of stellar flares is really robust," Argiroffi said. That said, future research could uncover more stellar coronal mass ejections, allowing scientists to see how else these might differ from the ones produced by the sun, he noted.

The scientists detailed their findings online May 27 in the journal Nature Astronomy.