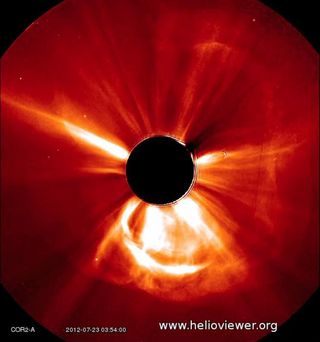 NASA's Solar TErrestrial RElations Observatory (STEREO) spacecraft observed this fast-moving coronal mass ejection on July 23, 2012. Because the CME is headed in STEREO's direction, it appears like a giant halo around the sun.
(Image: © NASA/STEREO)

A powerful sun storm in July unleashed a wave of plasma and charged particles into space, and scientists now say this solar outburst may be one of the fastest ever recorded.

On July 23, the sun blasted a massive cloud of solar material, called a coronal mass ejection(CME), into space, sending it whipping by NASA's twin STEREO spacecraft. Scientists used STEREO's observations to calculate that the speedy CME was traveling between 1,800 and 2,200 miles per second (2,900 and 3,540 kilometers per second).

The CME's blistering pace makes it the fastest one ever seen by STEREO (short for Solar TErrestrial RElations Observatory), and one of the fastest solar outbursts clocked by any spacecraft, the researchers said.

"Between 1,800 and 2,200 miles per second puts it without question as one of the top five CMEs ever measured by any spacecraft," C. Alex Young, a solar scientist at NASA's Goddard Space Flight Center in Greenbelt, Md., said in a statement. "And if it's at the top of that velocity range, it's probably the fastest."

Strong solar storms can trigger CMEs, and if these clouds of plasma and charged particles hit the Earth head-on, they can cause geomagnetic and solar radiation storms that have the potential to knock out satellites in space and power grids on the ground. [Photos: Huge Solar Flare Eruptions of 2012]

Since the CME on July 23 was not directed at Earth and posed no danger to our planet, the observations made by STEREO represent a good opportunity for scientists to study what causes CMEs and how they affect the space they travel through.

"Seeing a CME this fast, really is so unusual," Rebekah Evans, a space scientist at Goddard's Space Weather Lab, said in a statement. "And now we have this great chance to study this powerful space weather, to better understand what causes these great explosions, and to improve our models to incorporate what happens during events as rare as these."

With improved models of solar eruptions and CMEs, scientists will be able to better predict space weather events, which could help protect the planet from potentially harmful effects of powerful solar storms.

The STEREO mission was launched in 2006, and is made up of two sun-watching spacecraft that orbit on opposite sides of the sun, enabling scientists to simultaneously see the entire surface of the sun. These twin probes have also allowed scientists to make more precise measurements of CMEs and their speeds, the researchers said.

The CME on July 23 was also seen by the Solar Heliospheric Observatory (SOHO), which is a joint mission between NASA and the European Space Agency. The scientists compared data from both of the missions to help them narrow down the velocity of the solar outburst.

The super-fast CME came from an active region on the sun that was responsible for a flurry of solar activity in late July. Space weather scientists at NASA had been monitoring this active region, called AR 1520, for three weeks before it fired off the blazingly fast CME.

"That active region was called AR 1520, and it produced four fairly fast CMEs in Earth's direction before it rotated out of sight off the right limb of the sun," Evans explained. "So even though the region had released multiple CMEs and even had an X-class flare, its strength kept increasing over time to eventually produce this giant explosion. To try to understand how that change happens makes for very exciting research."

The sun's activity waxes and wanes on a roughly 11-year cycle. The sun is currently moving toward a period of peak activity, called the solar maximum, in mid-2013.