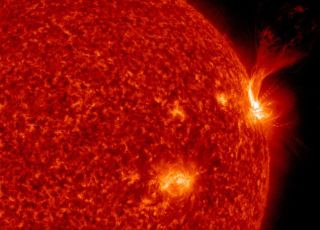 A powerful M5.8 solar flare erupts from an active sunspot region on the sun (far right) in this close-up from an image captured by NASA's Solar Dynamics Observatory on April 3, 2017.
(Image: © NASA/SDO)

The sun has unleashed three intense solar flares in just two days — each one stronger than the last — in an unexpected uptick in solar activity.

The flares began on Sunday (April 2), when the sun fired off a moderate, M5.3-class solar flare. A stronger, M5.7 solar flare followed later that same day. Then, today (April 3), the sun erupted with an M5.8 flare. NASA's Solar Dynamics Observatory spacecraft captured video of the flares as they occurred.

Monday's eruption marked the strongest solar flare of 2017, according to the space weather-tracking website Spaceweather.com.

Officials with Space Weather Prediction Center (SWPC) operated by the National Oceanic and Atmospheric Administration said this week's solar flares originated from the sunspot region known as Active Region 2644. This sunspot group is near the western limb (or edge of the sun as seen from Earth) and should take two days to fully rotate out of view, SWPC officials wrote in an update.

The uptick in solar activity comes amid a relatively quiescent phase of the sun's weather cycle, according to NASA. In late March, NASA images showed no sunspots on the star, suggesting that the sun was approaching the minimum-activity phase of its solar weather cycle, agency officials added.

"Solar flares are powerful bursts of radiation," NASA officials wrote in their statement. "Harmful radiation from a flare cannot pass through Earth's atmosphere to physically affect humans on the ground. However — when intense enough — they [flares] can disturb the atmosphere in the layer where GPS and communications signals travel."

According to Spaceweather.com, the three solar flares have triggered at least four significant shortwave radio blackouts.

"People who might have noticed these blackouts include ham radio operators and mariners using low-frequency rigs for communication at frequencies below 10 MHz," the website reported.