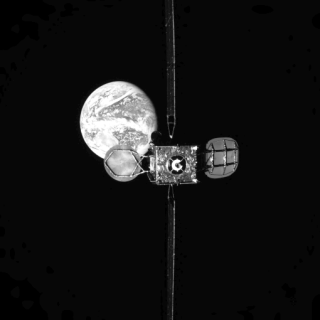 Satellite operator Intelsat, which launched the world's first commercial communications satellite Intelsat 1 in 1965, filed for Chapter 11 bankruptcy Wednesday (May 13) in order to ease a multibillion-dollar debt and join an FCC spectrum clearing program.

In a statement Wednesday, Intelsat representatives said the bankruptcy filing was spurred, in part, by the company's plan to join the FCC's accelerated clearing of the C-band spectrum to make way for faster 5G wireless satellite communications.

The company, like many other space industry firms, is also experiencing some economic fallout from the ongoing coronavirus pandemic. However, Intelsat is also dealing with $15 billion in debt, according to a SpaceNews report, which added that the company missed a $125 million dept payment in April.

Intelsat representatives said Wednesday that the company has secured $1 billion in financing that, once passing court approval, will allow the company to fund its C-band spectrum clearing work for the FCC program. In order to receive the $4.87 billion from the FCC, Intelsat must compress the data rates of its customers from 500 megahertz of C-band into the 200 megahertz range by December 2023, SpaceNews reported.

"Intelsat is the pioneer and foundational architect of the satellite industry," CEO Stephen Spengler said in the statement. "We intend to move forward with the accelerated clearing of C-band spectrum in the United States and to achieve a comprehensive solution that would result in a stronger balance sheet."

Intelsat is the third satellite operator in as many months to file for bankruptcy. Satellite constellation startup OneWeb filed for Chapter 11 bankruptcy in March, followed by Speedcast in April.

Intelsat's news comes just weeks after one of the company's older satellites, Intelsat 901, was boosted into a new orbit in the world's first commercial satellite servicing mission.

In that flight, a Northrop Grumman space tug (called Mission Extension Vehicle 1) attached itself to Intelsat 901 and corrected the older satellite's orbit. Intelsat 901 launched in 2001 and was out of fuel and unable to correct its course on its own.