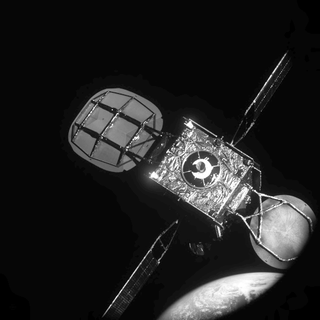 Northrop Grumman's Mission Extension Vehicle 1 (MEV-1) captured this view of its target, the Intelsat 901 communications satellite, from a distance of 20 meters during docking operations on Feb. 25, 2020. Earth is visible in the background.
(Image: © Northrop Grumman)

"Can I get a boost?" has officially made it to space.

The first commercial satellite servicing mission has been declared a success after the Intelsat 901 (IS-901) communications satellite returned to work providing internet connectivity.

The satellite, which launched in 2001, had been running low on fuel needed to maintain its correct orbit. But rather than launch a replacement internet satellite, its owner, Intelsat, hired Northrop Grumman to conduct a first-of-its-kind mission. That project sent another satellite, called Mission Extension Vehicle 1 (MEV-1) to connect to IS-901 in February and take responsibility for keeping the internet satellite in the proper location to do its job.

"We see increased demand for our connectivity services around the world, and preserving our customers' experience using innovative technology such as MEV-1 is helping us meet that need," Intelsat Chief Services Officer Mike DeMarco said in a Northrop Grumman statement released today (April 17).

That statement confirmed that MEV-1 has successfully latched onto IS-901 and maneuvered it back to its proper orbit, and that the internet satellite is again providing services to Intelsat customers.

MEV-1 will now spend five years attached to IS-901 to extend that satellite's tenure. After the contract ends, MEV-1 will steer the old satellite to a safe orbit, detach, and join up with a different satellite to provide the same services. MEV-1 should be able to partner with satellites for a total of 15 years, according to a previous Northrop Grumman statement.

Northrop Grumman is planning to launch a second mission-extension vehicle later this year, which will also aid an Intelsat satellite.

"This historic event, highlighted by the first in-orbit rendezvous and docking of two commercial satellites and the subsequent repositioning of the two-spacecraft stack, demonstrates the business value that MEV offers to customers," Tom Wilson, vice president of Northrop Grumman Space Systems, said in a statement. "Now that MEV-1 has successfully delivered on its mission to place the Intelsat 901 satellite back into operational service, we will continue to pioneer the future of on-orbit servicing through our multi-year technology roadmap leading to additional services such as inspection, assembly and repair."