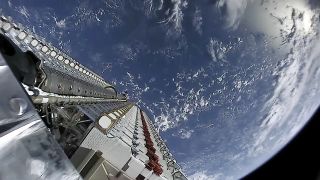 Space companies worldwide want to bring more data to your devices, faster than ever before.

Entities ranging from SpaceX to Amazon are launching (or may launch soon) huge numbers of new satellites that can carry the extra bandwidth. And cellular network providers around the world are upgrading their equipment on the ground to meet the expected future demand.

This new technology is being built out for new 5G networks. It's touted as a big leap over current 4G technology, which allows you to do data-intensive things like stream Netflix.

Related: 5G Network: How It Works, and Is It Dangerous?

5G will be even better, Will Townsend, a senior analyst for market research firm Moors Insight & Strategy, told Space.com. Users will experience less latency, he said. Latency refers to the time it takes to send a packet of data to a receiver (like a cellphone) on a network. 4G networks have about 50 milliseconds of latency, and 5G networks are expected to be 10 times better, with latencies of less than 5 milliseconds.

This will result in a "faster and more responsive" experience, Townsend said in an email. "For consumers, this will equate to faster downloads and a non-buffered video playback experience," he said. "Mobile gamers will appreciate fast responsiveness." Business applications will range from remote manufacturing to telesurgery, he added, and there will be a "richer retail experience bridging online capabilities." The growth of 5G will also help to address the rise of the internet of things, or the proliferation of network-connected, or "smart," devices. There are already smart fridges, stoves and security systems, for example, and consumers are also using wearable devices that share bandwidth on crowded mobile networks.

Meanwhile, businesses have embedded tracking devices in locations such as shipping containers, oil and gas lines, and power generators, with each device providing real-time information on the status of the thing being tracked. This information is meant to make it easier for companies to respond if something breaks and to keep better track of shipments crossing the globe with manufactured goods. Whole industries may change with the rise of connected devices, such as driving (with the use of autonomous vehicles) or factories (with production lines that may be able to monitor themselves).

When is 5G coming?

In the United States, the big four carriers — AT&T, Sprint, T-Mobile and Verizon — have already launched mobile 5G in a handful of metro areas. For example, as of July, Sprint had deployed mobile 5G in parts of Atlanta, Chicago, Dallas-Fort Worth, Houston, and Kansas City, Missouri, according to an article Townsend wrote for Forbes. And deployment will continue for all carriers through the rest of 2019 and into 2020, he said.

In many cases, however, you won't be able to access the network with your older device. Once the infrastructure equipment is upgraded, consumers will need to buy new cellphones. Check your preferred brand carefully. "Samsung and Android devices will lead Apple by 18 to 24 months in handsets," Townsend said. But there is big potential for carriers, who "are spending billions globally to upgrade the networks because they see the potential in monetizing new services," he added.

On the business side, one of the big arguments for moving to 5G is the ability to participate in "Industry 4.0," or the fourth industrial revolution. This term commonly refers to factories embedded with wireless connectivity in their machines and equipment. Using emerging artificial intelligence, the goal is for the factory to monitor its own production line and to make changes as needed for safety, efficiency or other needs. Some analysts worry that AI could replace jobs and make unemployment rise, while others are optimistic, saying new job opportunities will arise with the new technology.

Which space companies are working on 5G?

Many space entities are rushing to be trendsetters in 5G. For example, SpaceX has received approval to launch nearly 12,000 Starlink internet satellites (and recently applied to loft up to 30,000 more). In May, SpaceX launched its first 60 Starlink craft, which operate at a low-Earth-orbit altitude of about 342 miles (550 kilometers). (For comparison, the International Space Station orbits about 250 miles, or 400 km, above Earth.)

OneWeb has satellite-internet plans as well. The company plans to assemble a constellation of nearly 650 satellites to make web access easier around the world. OneWeb launched the first group of six satellites in February aboard a Soyuz rocket provided by European launch company Arianespace. These satellites circle Earth in near-polar orbits, at an altitude of roughly 750 miles (1,200 km). Amazon and Facebook are among the other companies planning 5G satellite networks.

What are the risks of 5G?

The proliferation of 5G satellites in orbit raises a number of questions from industry observers. A big one is the rising risk of collisions, which could, theoretically, spawn huge populations of orbital debris. The world got an inkling of this risk last month, when a European satellite made a precautionary maneuver to dodge a potential collision with one of the SpaceX Starlink satellites.

There also are worries about radio-frequency interference with all of these coming satellites. Operators of weather satellites, in particular, are concerned about some of the authorized 5G frequencies approaching the 23.8-gigahertz frequency commonly used in weather forecasts. At this bandwidth, "water vapor in the atmosphere gives off a feeble signal," and the satellites can examine humidity in the atmosphere, even if the region is cloudy, Popular Mechanics reported. That said, both NASA and the U.S. National Oceanic and Atmospheric Administration are negotiating with the Federal Communications Commission (which allocates spectrum frequencies to U.S. companies) to protect weather satellites, according to Popular Mechanics.

There's also concern that the abundance of satellites will interfere with sky observations. In June, the International Astronomical Union (IAU) expressed concern that thousands of satellites could interfere with the ability to examine dim and distant objects, not to mention the lives of nocturnal animals. "We do not yet understand the impact of thousands of these visible satellites scattered across the night sky, and despite their good intentions, these satellite constellations may threaten both," IAU officials said in a statement at the time.

As the 5G providers work out these kinks, there may be unpredictable effects of the new mobile technology, Townsend said. "Case in point: 4G LTE brought the capabilities required to make ride sharing a reality; no one really predicted that use case," he said. Townsend called this a positive development, as it "disrupted a multibillion [dollar] taxi cab industry [and] created new income opportunity" for individuals.