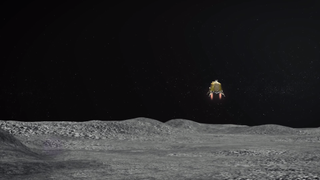 An artist's depiction of the Chandrayaan-2 lander, Vikram, preparing to alight on the lunar surface. The procedure occurred on Sept. 6, 2019, but appears to have gone wrong, with the Indian space agency losing contact with the lander late in the maneuver.
(Image: © ISRO)

As India attempted a daring moon landing last week — and in the wake of the apparent crash of its lander — NASA and U.S. companies have watched for any insights relevant to their own upcoming moon shots.

India's Chandrayaan-2 was an ambitious three-part mission, with an orbiter settled into circling the moon and a lander and rover that were meant to make a soft touchdown on Sept. 6. But late in the landing process, the Vikram lander went silent, and the Indian Space Research Organisation (ISRO) is running out of time to reconnect with the robot. If it cannot, the incident will mark the second lunar lander lost this year, joining Israel's Beresheet mission. For the U.S., which hasn't attempted to land on the moon since the Apollo program but wants to again soon, it's a stark reminder of the difficulty of spaceflight.

"For us from a management perspective, we just know this is hard," Camille Alleyne, deputy manager for the Commercial Lunar Payload Services (CLPS) program at NASA's Johnson Space Center, said during a panel yesterday (Sept. 12) at a symposium held in Huntsville, Alabama. The CLPS program wants to purchase landing services from U.S. companies to ferry science instruments. "It's clear that our contractor pool has a steep challenge on their hands."

Currently, two U.S. companies are taking part in the first round of CLPS missions, which are meant to land in 2021: Astrobotic and Intuitive Machines. Sharad Bhaskaran, mission director for Astrobotic, was also on the panel and had only praise for both Chandrayaan-2 and its Israeli predecessor.

"I think both the SpaceIL and the ISRO missions were huge successes," Bhaskaran said. "Our challenge is to learn from those missions, understand what happened, make sure that we don't make the same mistakes. If there are design changes we can make at this stage, we will make those. But I felt personally those were huge successes."

ISRO has said that even without a successful landed component, the Chandrayaan-2 mission has completed between 90% and 95% of its objectives. And the mission will likely produce plenty of science to come through the orbiter, judging by the success of its predecessor, which carried the instrument that identified water ice below the lunar surface inside dark craters near the south pole.

NASA's own moon orbiter may provide vital information for both ISRO and future American lunar landing attempts. The Lunar Reconnaissance Orbiter, which has been circling the moon since 2009, is scheduled to fly over the Vikram lander's targeted touchdown site on Sept. 17.

The spacecraft's photos could help ISRO diagnose the current status of the lander and aid the agency's continuing efforts to establish contact with it. In the wake of Beresheet's crash in April, the LRO also photographed that site.

But the LRO was also close enough during Vikram's landing attempt to gather data about the maneuver using its Lyman-Alpha Mapping Project instrument, Jay Jenkins, program executive for the Office of Exploration at NASA's Science Mission Directorate, said during the panel.

"As a matter of fact, during the descent of Chandrayaan-2, the LAMP instrument was observing the changes in the exosphere as a result of the rocket effluence coming down," he said. The exosphere is the moon's very thin would-be atmosphere; the rockets would have been attempting to slow the spacecraft enough for a soft landing. "So we're really eager to see how those observations turn out."

With Chandrayaan-2, India was attempting a feat that NASA has not tried in decades; its last soft landing on the moon was in 1972. Since then, the agency has concentrated on sending landers and rovers to Mars instead. And given NASA's focus on enlisting the commercial space industry in its endeavors, that leaves a tantalizing opportunity for U.S. companies to dream of succeeding at what Israel and India could not quite execute.

"I think those were very strong motivators for us to continue our mission and to be the first successful American landing since Apollo," Bhaskaran said