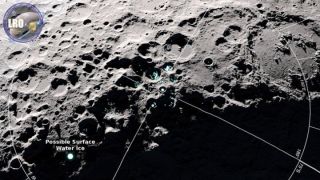 Water molecules are hopping around the moon as the lunar surface warms and cools throughout the day, new research suggests.

That research is based on observations gathered by NASA's Lunar Reconnaissance Orbiter, which has been studying our planet's close companion since 2009. A recent upgrade to an instrument onboard the orbiter called Lyman-Alpha Mapping Project (LAMP) has allowed scientists to keep a closer eye on where the moon's surface shows signs of water.

"This is an important new result about lunar water, a hot topic as our nation's space program returns to a focus on lunar exploration," Kurt Retherford, a co-author on the new research and the principal investigator of the LAMP instrument at Southwest Research Institute in Texas, said in a NASA statement.

Water on other planetary bodies could be a valuable resource not just for human explorers to drink, but also to serve as fuel for future robotic exploration, since water can be split to form rocket fuel, saving missions from having to carry that fuel from Earth.

But it was only in 2009 that scientists were able to confirm that there was water locked up in ice on the moon's surface. Now, they have tracked how individual water molecules bind and release from the rocky regolith as temperatures change over the course of the moon's monthlong daylight cycle.

According to the researchers' observations, water molecules remain stuck to the surface throughout the lunar morning. As the neighborhood warms up around lunar noon, some of the molecules lift off into the moon's puny atmosphere and migrate around the moon's surface until they stumble upon someplace cold enough that they can settle back down to the surface.

"More work is needed to fully account for the complexities of the lunar surface, but the present results show that [this] work is definitely worth doing!" Michael Poston, a co-author on the new research and a research scientist on the LAMP team at Southwest Research Institute, said in a statement.

The research was described in a paper published Feb. 21 in the journal Geophysical Research Letters.