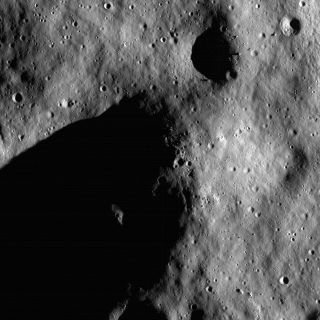 THE WOODLANDS, Texas — The vast deposits of water ice likely lurking at the moon's poles could be tapped to help spur a sustainable economic and industrial expansion into space, researchers say.

The lunar poles have a unique environment that can harbor water ice within permanently shadowed, super-cold craters. NASA’s Lunar Reconnaissance Orbiter (LRO) has been front and center in probing these sites with radar — places such as Shackleton crater, an impact feature that lies at the moon's south pole.

The peaks along Shackleton's rim are exposed to almost continuous sunlight, while its interior is forever in shadow.

"For a long time, the debate was what’s going on in Shackleton," said Paul Spudis, senior staff scientist at the Lunar and Planetary Institute in Houston. He is a team member on LRO’s Miniature Radio Frequency project, or Mini-RF for short. [Latest of the moon from NASA probe]

"What we found by analyzing the reflections of Shackleton was that it was consistent with ice. We’re seeing, effectively, what is a radar-transparent material that looks like ice," Spudis told SPACE.com here at the 43rd Lunar and Planetary Science Conference last week.

Spudis said ice is probably lurking within the crater.

"I don’t know how much there is," he said. "It’s not totally filled with it by any means. But Shackleton is a really interesting crater, almost 4.5 kilometers deep and 20 kilometers in diameter," or about 3 miles deep and 12.5 miles wide. "It is the deepest crater for that size range that I know of on the moon."

Over the last few years, several different lines of evidence have dovetailed to help shore up the case for water on the moon.

In 2009, for example, scientists announced that a NASA instrument aboard India's Chandrayaan-1 spacecraft had found evidence of water molecules on the surface.

Spudis was the principal investigator on a Chandrayaan-1 radar experiment that mapped the moon from 2008 to 2009. That imaging radar charted the poles' dark regions and found reflections diagnostic of water ice in permanently shadowed craters. [Gallery: Our Changing Moon]

Then there were the Lunar Crater Observation and Sensing Satellite (LCROSS) observations in 2009 that detected water vapor and ice particles kicked up after NASA's LCROSS impactor smashed into the moon's Cabeus crater.

At the moon’s north pole, Spudis said a minimum estimate for the amount of ice located there — as gleaned from Mini-RF data alone — is 600 million metric tons.

"If you convert that to liquid hydrogen and liquid oxygen to launch a rocket … that is the equivalent of a space shuttle launch every day for 2,200 years," Spudis said. "And that’s just what we can see. I think the actual amount is at least an order of magnitude greater than that. So there’s plenty of water. The water is there. We can use it to actually bootstrap spacefaring infrastructure. That’s the real significance."

The recent hints from NASA’s Messenger spacecraft of ice in areas of permanent shadow on sun-baked Mercury help endorse the frosty moon theory.

"For Mercury, the presence of ice at those poles reiterates the processes that can accumulate and sequester water in permanently dark areas," Spudis said. "It doesn’t speak to the moon per se, but it adds credence to the idea that we are interpreting the lunar data correctly."

To further build the "cold trap" case for ice on the moon, LRO’s Mini-RF team has partnered with the radar-beaming Arecibo radio telescope in Puerto Rico.

While LRO’s Mini-RF transmitter has failed, the hardware can still receive signals. In test shots last year and a recent data-gathering run, Arecibo bathed the moon in radar beams. The Mini-RF gear listened for those transmitted pulses reflected off the lunar surface to build up an image strip.

The technique is called bistatic radar observation. The data are being analyzed by specialists at Sandia National Laboratories, a U.S. Department of Energy facility in New Mexico.

Spudis said that given the go-ahead and funding for an LRO extended mission, a campaign of bistatic data collection runs can be done.

According to Ben Bussey, senior staff scientist of the Applied Physics Laboratory in Laurel, Md., the Mini-RF team can acquire bistatic radar measurements that will test the hypothesis that permanently shadowed areas near the lunar poles contain water ice.

Additionally, these measurements can be used for studies of the composition and structure of pyroclastic deposits, impact ejecta and melts, and the lunar regolith, Bussey and his fellow researchers explained at last week's meeting.

These data will provide a unique new piece of evidence to determine if the moon’s polar craters contain ice, Bussey and colleagues pointed out. What has been demonstrated to date, they said, is a completely new instrument mode, capable of exciting and quite different science.

This has not been done before for other planets, and will provide information on polar ice, lunar surface roughness and other properties, Bussey and his teammates reported.