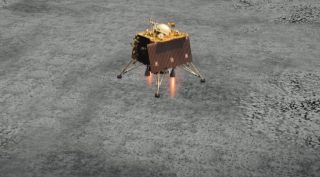 This visualization shows how Chandrayaan-2's Vikram lander planned to land on the moon.
(Image: © ISRO)

India has finally made it official: the country's long-silent Chandrayaan-2 moon lander Vikram did, in fact, crash into the lunar surface in September, apparently because of an issue with its braking rockets.

In newly released details about India's attempted lunar landing on Sept. 6, the Indian government has revealed that the Vikram craft "hard landed" on the moon because of a problem with its braking thrusters. Until now, the India Space Research Organisation had disclosed only that it had lost contact with the probe.

The update was announced by Jitendra Singh, the minister of state for the Department of Space, in a written response to the Lok Sabha, the lower house of India's Parliament. The news was first reported by SpaceNews.

"During the second phase of descent, the reduction in velocity was more than the designed value," he continued. "Due to this deviation, the initial conditions at the start of the fine braking phase were beyond the designed parameters. As a result, Vikram hard landed within 500 m of the designated landing site," Singh said.


This is the first time that the Indian government has formally acknowledged the crash landing.

On Sept. 10, following the loss of communication from what we now know was a crash on the moon, the ISRO announced that the "Vikram lander has been located by the orbiter of Chandrayaan-2, but no communication with it yet. All possible efforts are being made to establish communication with lander."

One explanation for why it has taken so long for the Indian government to formally recognize the crash is that, according to the ISRO, they were still trying to figure out exactly what happened. Engineers were working to reconstruct the events that led to the loss of communication with the lander and the ISRO was waiting until that work was done to make a formal announcement, S. Somanath, who directs the ISRO's Vikram Sarabhai Space Centre, said at the International Astronautical Congress (IAC) on Oct. 21, according to a statement.

However, while Somanath held off on making any formal declarations about Vikram, he did recognize that the craft most likely hit the moon so fast that it was "beyond its survivability," he said in the statement.