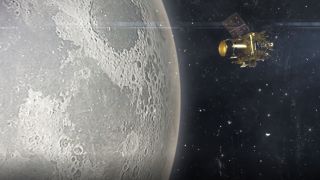 An artist's depiction of the Chandrayaan-2 orbiter studying the moon.
(Image: © ISRO)

India's second-ever lunar orbiter arrived at the moon just over a month ago, and the probe's instruments have already begun sending home science data.

The Chandrayaan-2 mission launched in July and was designed to tackle a host of questions about the moon, with a particularly sharp eye to the water ice the spacecraft's predecessor spotted at the south pole. The current orbiter carries eight different instruments — and Indian scientists are already poring over some of the mission's very first science data.

The orbiter carries two cameras, both of which have been hard at work. The Terrain Mapping Camera began surveying the moon as soon as Chandrayaan-2 arrived in orbit. Now, the Indian Space Research Organisation (ISRO), which runs the mission, has also released images taken by a second instrument, the Orbiter High Resolution Camera.

That camera, according to ISRO, captures the most detailed images to date of the lunar surface from an orbiting spacecraft, and is able to catch features that are about 10 inches (25 centimeters) across. On Oct. 4, ISRO released photos the camera took on Sept. 5 of a crater called Boguslawsky E, located near the lunar south pole.

But it isn't just photos that Chandrayaan-2 scientists have received from the orbiter. On Sept. 19, ISRO confirmed that all the instruments on board the spacecraft are working well, even as mission staff continues to try to understand what happened with the silent Vikram lander that appears to have crashed into the moon on Sept. 6.

ISRO released some initial data from an orbiter instrument called the Chandrayaan-2 Large Area Soft X-ray Spectrometer, or CLASS. The device is designed to measure X-ray fluorescence, which lets scientists identify where on the lunar surface certain elements — like magnesium, aluminum, silicon and iron — are located. The instrument works best when the sun releases a solar flare, sending a host of X-rays to the lunar surface, according to an ISRO statement.

But CLASS can also provide some valuable data about the environment around Earth. For about six days each month, the moon passes within Earth's geotail, scientists' name for the distorted bubble of Earth's magnetosphere created by the constant push of the solar wind that spews out from the sun.

So, when there isn't a handy flare to let CLASS see the lunar surface, if Chandrayaan-2 is inside Earth's geotail, the instrument can analyze how that environment differs from beyond the geotail. In September, CLASS did just that, measuring a sharp increase in particles that ISRO has identified as electrons during the spacecraft's pass through the geotail.

That's just the initial data from the instrument, but Indian scientists are excited by the potential the early observations suggest for Chandrayaan-2's tenure around the moon.

"More detailed studies in [the] future along with observations from other space missions, will enable a multi-point study, essential to unravel the 'dance of electrons to the music of magnetic fields' around [the] moon," ISRO wrote in a statement.