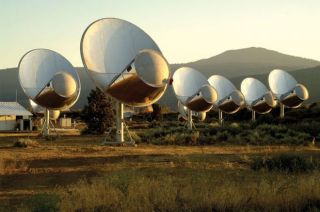 Scientists say we may find evidence for life beyond Earth within the next decades.
(Image: © SETI)

WASHINGTON — How long until we find evidence of life beyond Earth? If a panel of experts is on track with their estimates, it may be sooner than you think.

That's according to presenters at the International Astronautical Congress taking place here this week. During a discussion Tuesday Oct. 22), half a dozen people who spend their time focused on questions related to the search for life beyond Earth each offered their educated guesses — and their whimsical wishes — for when humanity might first gather conclusive evidence for extraterrestrial life.

That conversation got serious fast, with panel coordinator Claire Webb, a doctoral student in the history of science at the Massachusetts Institute of Technology. She co-opted the answer of one of the most venerable figures in the search for intelligent life, Frank Drake, who conceptualized the factors at play in finding intelligent life into what is known as the Drake Equation. "He said 2024," Webb said. "I think he's a pretty good authority, so I'm going to go with that."

Related: NASA's Planet-Hunting Probe Joins the Search for Intelligent Aliens
More: Humans May Be the Only Intelligent Life in the Universe

That estimate is on the short end of the spectrum provided by the panelists. "I wish I could say tomorrow, but that's being just overoptimistic," Mike Garrett, the director of Jodrell Bank Observatory in the U.K., said during the panel. "But I think there's a good chance of discovering life on Mars within the next 5 to 10 to 15 years. I think that really has to be a goal, that would set us on a course to do more interesting things in the area."

Some responses were presented without comment. Andrew Siemion, director of the Berkeley SETI Research Center, suggested Oct. 22, 2036 — 17 years to the day after the panel in question. Lucianne Walkowicz, an astronomer at the Adler Planetarium in Chicago, said she would ballpark it within the next 15 years.

Others offered a more detailed explanation. Sara Seager, an astronomer at the Massachusetts Institute of Technology focused on finding exoplanets, couched her response within the state of pending science projects that could be responsible for making the discovery. Those projects include a host of space-based telescopes, but none will be working any time soon.

"Assuming they get selected and they get built it'll still be awhile," Seager said. "So I'll say 20 years."

But these are all guesses, albeit educated ones, and that showed in how some confronted the question. "I certainly would like to think within my lifetime," Bill Diamond, president and CEO of the SETI Institute, said. "Hopefully that's more years than I think, but I absolutely think within my lifetime. Probably in the month of March, and hopefully the discovery comes in like a lion and goes out like a lamb."

And Diamond wasn't the only one to peg a potential discovery to their own personal timeline.

"I like the idea of my birthday," Pete Worden, moderator of the panel and executive director for Breakthrough Initiatives, said to close out the session, which began with belated birthday wishes. "So my 80th birthday, which is 10 years from now."