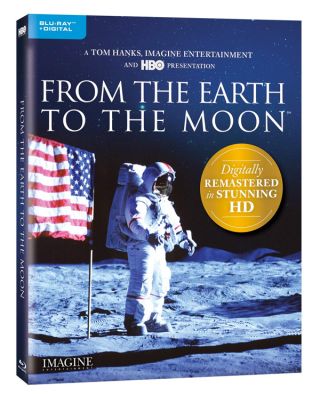 HBO's "From Earth to the Moon" recounting NASA's road to the Apollo 11 moon landing returns to TV for the 50th anniversary.
(Image: © HBO)

HBO's epic mini-series that chronicles different chapters of the Apollo program from a variety of viewpoints has finally received the high-definition treatment.

To commemorate the 50th anniversary of the Apollo 11 moon landing, HBO will air all 12 digitally remastered episodes of "From the Earth to the Moon" on HBO Go, HBO Now and HBO On Demand today (July 15). Then, on Tuesday (July 16), the Blu-ray will be available to buy, and on Saturday (July 20), the 50th anniversary of the day Neil Armstrong first stepped out onto the lunar surface, HBO2 will air a marathon of the series, starting at 8:45 a.m. (ET/PT).

The mini-series first aired in 1998; each episode explored a single element of the Apollo story. Tom Hanks, a self-confessed space buff, was heavily involved, acting as the show's host, executive producer and even directing one of the episodes.

Ron Howard was also a producer and the series has an impressive cast, including Bryon Cranston, Cary Elwes, Ann Cusack, Sally Field and Alan Ruck.

The first six episodes focus on the buildup and eventual landing of the Eagle lunar module. Episode 1, titled "Can We Do This?," maps the origins of Apollo from its Mercury and Gemini roots. Episode 2, "Apollo 1," and tells of the tragic fire and the subsequent appointing of blame. Episode 3, titled "We Have Cleared the Tower," portrays the intense preparation for Apollo 7.

The fourth episode, called "1968," puts Apollo 8 into its historical context. Episode 5, one of my favorites, is titled "Spider" and follows the engineering team at Grumman as they designed, built and tested the lunar modules during Apollo 9 and 10. Rounding off the first half of the mini-series is episode 6, "Mare Tranquilitatis," which offers a personal perspective from each of the Apollo 11 astronauts, Neil Armstrong, Michael Collins and Buzz Aldrin.

The second half of the series starts with "That's All There Is" and gives us an insight into the camaraderie of the Apollo 12 crew. Episode 8, "We Interrupt This Program," shows a by-now-indifferent media galvanized by the events of Apollo 13, during which an explosion in the service module forced the crew to cut their journey short and head back to Earth in the "lifeboat" lunar module. Episode 9, "For Miles and Miles," tells of Alan Shepherd's return to the space program with Apollo 14 after being grounded between Mercury and Gemini.

Episode 10 is called "Galileo Was Right"; it follows the Apollo 15 astronauts, particularly Dave Scott, as they train in lunar-field geology, a subject in which none of them had any prior experience. The outstanding episode 11, titled "The Original Wives Club," offers the unique perspective from the astronauts' wives’ point of view. Lastly, episode 12, "La Voyage Dans La Lune," brings the story full circle by contrasting Georges Méliès's vision, seen in his 1902 film "A Trip To The Moon," with the cancellation of the program after Apollo 17.

The standard-definition visual effects from the original 1998 release have been replaced with modern computer-generated imagery (C.G.I.) based on reference models from NASA, and the Blu-ray will feature remixed audio in Dolby ATMOS.

The Blu-ray also includes two bonus features. The first is a captivating 30-minute look at how the show was filmed and the effort that went into this three year, $68 million project. The team strove to get every detail exactly right, from the surface of the moon and the astronaut's environment suits to the interior of the Apollo command and lunar modules.

The short film includes interviews with many members of the cast and crew, including executive producer Tom Hanks and the actors who played the Apollo 11 crew — Cary Elwes (Collins), Bryan Cranston (Aldrin) and Tony Goldwyn (Armstrong) — who all share stories about where they watched the moon landing on July 20, 1969.

The second bonus feature is a shorter, 11-minute featurette that delves into the complex process of updating the 21-year-old mini-series. From scanning the original film and creating a digital version to enhance the color and using C.G.I. to replace what were practical effects, the task was truly monumental.

But the reward is a beautiful, new and improved version of one of the very best accounts of the incredible Apollo story. "From The Earth To The Moon" stands alongside "The Right Stuff" and "First Man." It benefits from being, in essence, a 12-hour production and can therefore cover a lot more of the story. An amazing cast, together with stunning visuals and writing of the highest quality, make this an absolute must-have for any space buff.

The Blu-ray is available to pre-order from Amazon here.