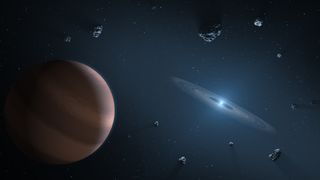 An artist's depiction of an exoplanet and a debris disk orbiting a white dwarf star.
(Image: © NASA/JPL-Caltech)

A future European mission could use gravitational waves to detect planets straight out of the beloved science-fiction novel "The Hitchhiker's Guide to the Galaxy," according to a new paper.

In the past few years, gravitational waves have probed the pairs of black holes. Soon, they may also reveal planets that orbit pairs of white dwarfs, stars at the end of their lifetimes.

"A planet that has survived the evolution of two suns — two main-sequence stars that become binary white dwarfs — is definitely very, very old!" Nicola Tamanini, lead author of the new research and an astronomer at the Max-Planck Institute in Germany, told Space.com by email.

Gravitational wave detectors like LISA, which is set to launch in the early 2030s, identify the gravitational waves produced by compact pairs of objects. Such pairs could include double white dwarves, which are born when average-size stars like the sun die and blow off their outer layers. No longer massive enough to power fusion at their core, they slowly cool and die.

These cool stars can be a challenge to spot using light and other techniques based on the electromagnetic spectrum. Finding the faint planets that orbit them is even more difficult. So far, only one planet and a single chunk of planetary debris have been detected orbiting a white dwarf, although the existence of planetary leftovers has been indirectly observed.

Understanding how many worlds survive around white dwarfs can provide insights into planetary systems at the end of their lifetime — and Tamanini and his colleague believe that LISA will allow scientists to do just that. They found that, if such planets exist, LISA should be able to detect a few hundred new exoplanets. Their research was published July 8 in the journal Nature Astronomy.

Over the last three decades, astronomers have detected more than 4,000 exoplanets. The real haul came with NASA's Kepler space telescope mission, which relied on a technique called the transit method to identify a world as it passed between Earth and its star, dimming the light Kepler measured.

Exoplanet gravitational-wave discoveries would function in a similar way. Two white dwarfs whose planet orbits both stars would have a different gravitational-wave signature than a planet-free pair. Studying this signal should reveal a rough estimate of the mass of the third object, Tamanini said, allowing researchers to pick out planets from orbiting stars and brown dwarfs.

Electromagnetic instruments could help to gather complementary data for the closest such objects, although they wouldn't be able to observe the planet itself. LISA could detect planets as small as 50 Earth masses, according to the new paper.

A single white dwarf and its planet would also emit gravitational waves, Tamanini said, but not a signal powerful enough for LISA or any other current or near-future instrument to detect.

Unlike their electromagnetic equivalents, gravitational-wave detectors can peer through dense regions of light and strong signals. LISA could see through the center of the galaxy to spot worlds on the other side of the Milky Way — and perhaps even in nearby galaxies, like the Large Magellanic Cloud.

The end of a star's road

In 5 billion years, the sun will swell up into a red giant star before collapsing into a white dwarf. The process will destroy Mercury and Venus. Earth's orbit lies close to what will become the edge of the giant white dwarf, and its fate is less certain. But Mars and the outer planets will survive the catastrophe and should continue to orbit the sun's remains.

"We expect the majority of planetary systems to survive the evolution of their host star," astronomer Christopher Manser of the University of Warwick in the U.K., who wasn't involved in the new research, told Space.com. Manser discovered an exoplanet fragment orbiting a white dwarf.

Additionally, the death of one planetary system may lead to the birth of another. Current studies suggest that the debris from destroyed worlds — those Mercuries and Venuses — orbits many white dwarfs. "There is a theory that the material in this disk could form second-generation planets very close to the white dwarf," Manser said. If large enough, these phoenix planets, born from the ashes of the worlds that came before, could be detected by LISA and other future gravitational-wave missions.

Add a second white dwarf to the mix and the fate of planets around the binary is less certain. At least one pair of white dwarfs have been discovered consuming planetary debris. "It does suggest planets in [orbits around both stars] can survive, though, Manser said.

Until LISA launches, scientists can't be sure whether planetary systems around binary white dwarfs are common or few and far between. But if these worlds do exist, LISA's discoveries could help scientists to improve their models of how solar systems are born and die. "We will be looking at a stage of the planetary evolution unknown until now," Tamanini said. If they don't exist, that still tells scientists something about how planetary systems evolve.

And if scientists can spot planets orbiting dual white dwarfs, such worlds would be straight out of science fiction. In Douglas Adams' classic "The Hitchhiker's Guide to the Galaxy," characters visit the planet Magrathea, a world orbiting the pair of stars Soulianis and Rahm, whose inhabitants constructed the planet-size computer Earth. Adams describes the planet as "very old" and the light from the twin stars as white, which Tamanini and Danielski interpret as coming from two white dwarfs.

Gravitational waves "are probably not the answer to the ultimate question of life, the Universe, and everything," the authors wrote at the close of their paper. "But they might, after all, constitute the key to find Magrathea."