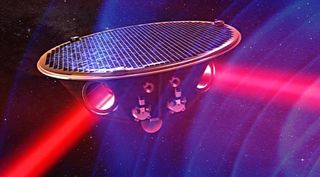 WASHINGTON — The European Space Agency has selected an ambitious space-based gravitational-wave observatory as its next large space science mission, scheduled for launch by 2034.

ESA announced June 20 that its Science Program Committee has formally selected the Laser Interferometer Space Antenna (LISA) mission for development as the third large, or "L3," mission its Cosmic Vision program of science missions. It follows the Jupiter Icy Moons Explorer, or JUICE, mission under development for launch in 2022 and the Athena X-ray observatory planned for a 2028 launch.

The selection of LISA was widely expected. The call for proposals issued by ESA in October 2016 specifically requested missions that fit a theme called "The Gravitational Universe" for the study of gravitational waves. The LISA mission concept had been under study for a number of years to meet that goal. ['We Don't Planet' Episode 8: Gravitational Waves]

The selection was supported by the February 2016 announcement of the first detection of gravitational waves, predicted by Albert Einstein's theory of general relativity a century ago. That detection, and two subsequent ones, were made by the Laser Interferometer Gravitational-wave Observatory (LIGO), a pair of groundbased detectors in the United States.

LISA will use three spacecraft operating in an Earth-trailing orbit around the sun, separated from each other by 2.5 million kilometers in a triangular formation. The far longer baseline of LISA — LIGO's detectors are only a few kilometers long — will allow it to detect gravitational waves at lower frequencies.

LISA's prospects were also buoyed by the success of an ESA technology demonstration mission, LISA Pathfinder, launched in December 2015. That spacecraft demonstrated the extreme stability needed to serve as a gravitational-wave detector.

LISA Pathfinder not only met the goals set for that demonstration mission, but also showed a greater level of precision needed for the operational LISA mission, easing doubts about the feasibility of LISA. ESA announced June 20 that LISA Pathfinder, which received a six-month extended mission in December 2016, will shut down at the end of the month.

Long before ESA's announcement, scientists were confident about LISA's selection. "LISA looks like it's going to happen. It looks like it's on a pretty firm track," David Shoemaker, senior research scientist at the Massachusetts Institute of Technology's Kavli Institute for Astrophysics, said at a January meeting of the American Physical Society.

Shoremaker chairs the L3 Study Team, a NASA-chartered group studying the potential contributions NASA could make to LISA. The LISA proposal assumed that NASA would contribute 20 percent of the mission's overall cost through instruments or technology. The call for proposals capped ESA's cost for the L3 mission at 1.05 billion euros ($1.17 billion).

ESA also announced June 20 that a medium-class mission, Planetary Transits and Oscillations of stars, or PLATO, will move into its next phase of development. ESA selected PLATO as its third medium, or M3, mission in 2014, and ESA said the mission was now formally adopted into the agency's science program, allowing it to move into full-fledged development.

PLATO, planned for launch in 2026, two years later than originally announced, will survey a large number of bright stars, looking for evidence of exoplanets orbiting them as those planets transit, or pass in front of, the stars as they orbit them. PLATO is intended to be a more advanced version of exoplanet missions like NASA's Kepler and the upcoming Transiting Exoplanet Survey Satellite, scheduled for launch in 2018.

In addition to LISA and PLATO, ESA said it would participate in two missions of opportunity. It will be a part of the agency's Proba-3 formation flying technology demonstration mission, where two spacecraft will fly 150 meters apart, aligned so that one spacecraft blocks the disk of the sun as seen by the other. Instruments on Proba-3 will allow detailed study of the sun's corona.

ESA will also participate in Japan's X-ray Astronomy Recovery Mission (XARM), a replacement for the Hitomi spacecraft lost shortly after launch in 2016. The Japanese government has approved plans to develop XARM, and NASA will build a replacement for an X-ray spectrometer instrument flown on Hitomi.