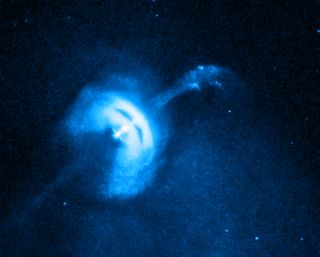 Vela is a neutron star famous among so-called "glitch hunters," or astronomers who search the skies for stars that rotate regularly but suddenly speed up. This particular star, which is known to glitch around once every three years, just revealed its stellar insides during its latest glitch.

A team of astronomers at Monash University in Australia recently studied the glitching star, located around 1,000 light-years away from Earth in the southern sky. They observed how Vela spins faster during its glitch before relaxing to a final state, Monash University officials said in a statement.

During this observation, the scientists also noticed that the rotating star slows down right before it glitches.

"Immediately before the glitch, we noticed that the star seems to slow down its rotation rate before spinning back up," Greg Ashton, a researcher at the Monash University School of Physics and Astronomy and one of the authors of the study, said in the statement. "We actually have no idea why this is, and it's the first time it's ever been seen."

Neutron stars are some of the densest objects in the universe, as each has a mass about 1.4 times that of the sun while measuring only 12.4 miles (20 kilometers) in diameter. The stars rotate regularly, spinning around 43,000 times per minute. At times, however, some neutron stars glitch and speed up.

For this recent study, the astronomers reanalysed observations of the Vela glitch made in 2016; the scientists observed how the neutron star slows down right before the glitch and then speeds back up afterward. The findings suggested that this "slowdown" is the reason behind the glitch, as it creates a lag within the star's internal components, the study said.

Those internal components include a "soup of superfluid neutrons in the inner layer of the crust [that] moves outwards first and hits the rigid crust of the star causing it to spin up," Paul Lasky, a researcher at the Monash University School of Physics and Astronomy and a co-author of the study, said in the statement.

"But then, a second soup of superfluid [neutrons] that moves in the core catches up to the first, causing the spin of the star to slow back down," Lasky added.

The lag that may cause the glitch occurs between that superfluid of subatomic particles and its surrounding crust, according to the study.

Previous studies have predicted this process by which rotating stars speed up and slow down, but this study marks the first real-time observations of that slowdown prior to a glitch. The team from the recent study said their observation could lead to new theories explaining neutron stars and their glitches.

The study was published in the journal Nature Astronomy Monday (Aug. 12).