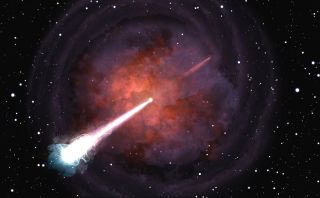 This artist's impression shows two neutron stars merging, surrounded by a coccoon of released material with a jet bursting through.
(Image: © Beabudai Design)

A hyper-detailed view of the the first detected neutron star merger reveals how collisions between dead stars can generate some of the most powerful explosions in the universe, according to a new study.

In 2017, astronomers witnessed a pair of neutron stars merging for the first time. Neutron stars are the remains of large stars that died in cataclysmic explosions known as supernovas. The name derives from the fact that the gravitational pull of these stars is strong enough to crush together protons and electrons to form neutrons.

Researchers made the 2017 find by detecting ripples in the fabric of space and time known as gravitational waves, which radiated from a crash between a pair of neutron stars located about 130 million light-years away from Earth. Scientists followed up on the discovery of this merger, dubbed GW170817, with observations made from conventional telescopes.

A little over a second after GW170817's gravitational waves were detected, researchers spotted, via telescope, a short gamma-ray burst. Such bursts are the most powerful explosions in the universe. Each burst-generating event, in anywhere from milliseconds to minutes, gives off as much energy as the sun does during its entire 10-billion-year lifetime. The bursts are traditionally divided into two groups — long and short — depending on whether they last more or less than 2 seconds, respectively.

The unusually long-lived radio and X-ray emissions seen from GW170817 have proven to be a challenge for scientists to explain. One possibility is that this puzzling afterglow was the result of powerful, narrow jets of radiation from remnants of the collision that drilled through the rest of the debris and were directed "off axis," or away from the line of sight of Earth. Another model suggests that these jets did not punch through the merger's scraps but instead heated them up, giving birth to an expanding cocoon of material.

Shedding light on GW170817's aftermath could illuminate the origins of short gamma-ray bursts, the study's researchers said. Previous work revealed that long gamma-ray bursts are likely caused by jets of material shot from supernovas at relativistic speeds, or ones close to the speed of light. "Short gamma-ray bursts, on the other hand, remained a puzzle," Om Sharan Salafia, an astrophysicist at the Astronomical Observatory of Brera in Italy and co-author on the new study, told Space.com.

The cause of GW170817's afterglow was under debate because previous research could not obtain images with enough resolution to deduce the size of these emissions' source. To help solve this mystery, Salafia and his colleagues used an array of 32 radio telescopes spread over five continents to examine the radio afterglow of GW170817 about 207 days after the merger. By combining data from this array, the researchers essentially created a single, extremely large radio telescope — one 7,380 miles (11,878 kilometers) wide and powerful enough to obtain a sharper picture of the explosion.

These new findings suggest that this radio source has a relatively tight size, which does not support the cocoon model, the researchers said. Instead, the data suggest that GW170817 generated a jet moving at relativistic speeds capable of punching through surrounding debris into interstellar space and beyond.

"Our 'picture,' thanks to its extremely high resolution — close to the highest possible resolution for this kind of observation — could tell these two scenarios apart," Salafia said.

These findings "shed light on the nature of short gamma-ray bursts; similarly to their 'long' cousins, they are produced by relativistic jets," Giancarlo Ghirlanda, an astrophysicist at the Astronomical Observatory of Brera and co-author on the study, told Space.com. The researchers estimated that at least 10 percent of neutron star mergers generate such relativistic jets.

The scientists detailed their findings in the Feb. 22 issue of the journal Science.