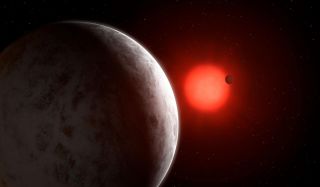 An artist's impression of the star Gliese 887 and its planetary system.
(Image: © University of Göttingen)

The brightest red dwarf star in the sky may be the best chance astronomers have yet to analyze the atmospheres of alien worlds — and perhaps detect whether those worlds have life, a new study finds.

Previous work found that many red dwarfs host planetary systems, ones usually made up of multiple small worlds. Still, "we've been looking for exoplanets orbiting Gliese 887 for nearly 20 years, and while we saw hints of a planetary signal, it wasn't strong enough to convince ourselves that it was a planet," study lead author Sandra Jeffers, an astrophysicist at the University of Göttingen in Germany, told Space.com.

Pressing forward, the researchers examined Gliese 887 for 80 nights in 2018. They relied on the High Accuracy Radial Velocity Planet Searcher (HARPS) instrument at La Silla Observatory in Chile, combining this data with archival measurements of the star spanning nearly two decades.

Astronomers use two strategies to discover most exoplanets, or worlds beyond our solar system. One method relies on how distant worlds regularly block out a fraction of light from their stars as they pass in front of their stars from the observer's perspective. However, this method will only spot planets that pass through the line of sight between Earth and their stars, meaning it will only detect a small fraction of exoplanets.

Instead, the scientists in this latest work looked for any wobbles from Gliese 887 due to gravitational tugs from orbiting planets. They found the red dwarf has at least two "super-Earth" exoplanets, dubbed Gliese 887 b and Gliese 887 c. The former is about 4.2 times Earth's mass and orbits just 6.8% of an astronomical unit (AU) from its star (one astronomical unit is the average distance between Earth and the sun), whereas the latter is about 7.6 times Earth's mass and orbits 12% of an AU from the red dwarf.

The researchers also found evidence for a possible third planet farther out from Gliese 887. Although the red dwarf's two confirmed planets are likely too hot for life as we know it on Earth, this potential third planet might lie within the star's habitable zone, where surface temperatures are suitable to host liquid water.

The bright light from this red dwarf might help astronomers learn more about the atmospheres of its planets by illuminating what ingredients make up those skies, Jeffers said. (The spectrum or wavelengths of light that an element absorbs or emits can act like a fingerprint, revealing the identity of the material in question.)

In addition, Gliese 887 is unusually quiet when it comes to flares and other explosive activity when compared to other red dwarfs. This factor would make it easier to analyze exoplanet atmospheres, because such activity could get confused with atmospheric signals, she added.

"The host star Gliese 887 is the best star in close proximity to the sun to understand whether its exoplanets have atmospheres and whether they have life, because it is such a bright and quiet star," Jeffers said.

The unusually quiet nature of Gliese 887 suggests that if it does possess a planet within its habitable zone, that world might have a greater chance at life than other red dwarf planets, which often erupt with dangerous flares.

"When a star is active, this makes it more likely that the original atmosphere can be blown away, with the result that the planet is less shielded from the star's activity," Jeffers said.

In the future, "our next step is to see if there is a third planet, and to try and detect exoplanetary atmospheres using the James Webb Space Telescope due to be launched next year," Jeffers said.

The scientists detailed their findings in the June 26 issue of the journal Science.