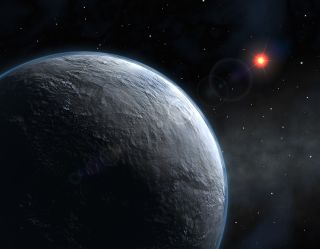 An artist's rendering of an Earth-like exoplanet with an atmosphere. The first hints of life could come from an unusual atmosphere composition.
(Image: © ESO)

A new mathematical formula predicts the ratio of particular molecules in the atmospheres of far-off planets, letting researchers more easily tell when something unusual is happening there.

The new method is tailor-made to predict the ratios of nine important atmospheric molecules built from carbon, hydrogen, oxygen and nitrogen, so researchers can quickly learn what combination of molecules should be found on a high-temperature planet without using complicated simulations.

The first hint of life on another planet might come from seeing something strange in a planet's atmosphere — such as molecular oxygen or another gas at higher levels than expected — that can't be explained by a planet's geology or chemistry. This method applies specifically to hot exoplanets under certain conditions, but calculations like these offer helpful practice for interpreting signals from alien atmospheres, equipping researchers to identify what to expect in a particular atmosphere and look for those interesting (and perhaps biological) variations. [10 Exoplanets That Could Host Alien Life]

"The state of the art in looking at the atmospheres of exoplanets is like looking at the solar system planets a few decades ago," Kevin Heng, an exoplanet researcher at the University of Bern in Switzerland, told Space.com. "When we didn't have ships and probes that we could send to these planets we couldn't have detailed photographs, and all you had was spectra — meaning you take the light and you spread it into different colors."

To calculate the expected levels of different molecules in a planet's atmosphere, one has to know the temperature and pressure conditions on the planet, all the different chemicals available and all the different reactions that can happen between those chemicals. Those reactions can change the ratios of the chemicals over time as the molecules combine with each other in different ways, until they reach a stable mixture (meaning the ratios of the chemicals won't change very much), called an "equilibrium state."

The equations describing chemical reactions in a planet's atmosphere are all interconnected, making the overall collection difficult to solve — so researchers will use a computer program to simulate all the possible reactions that could take place before the system reaches a balance.

Heng's group's solution simplifies this situation significantly for one particular collection of molecules — rather than a whole simulation, that final, balanced ratio of molecules is calculated using an equation that can be solved on paper or in a single line of computer code. (The equation is polynomial, which means it's the sum of a variable raised to different powers, and the version that incorporates all nine molecules has 10 terms.)

For Heng's work, which involves taking the spectrum created by a planet's atmosphere and "inverting" it to figure out what combinations of molecules and conditions would create it, this offers a dramatic speedup: To find the right match, researchers have to evaluate "millions, if not billions, of different" models in a short period of time, Heng said, and this method can whip up each of those scenarios quickly.

Finding a balance — and losing it

The equilibrium state of a set of molecules, for instance in an alien atmosphere, is the ratios of substances they will eventually settle into, given a constant set of conditions and no outside influence. It's what one will generally expect to see when looking at the planet from afar.

"A planetary atmosphere has its own chemistry, but figuring out what the equilibrium state [is] (and therefore the relative abundances of molecules) is a big computational challenge because of all the reaction pathways and individual equilibria and the cross-talk of everything," Caleb Scharf, an exoplanet researcher at New York University, told Space.com in an email.

The quick calculations offered for particular combinations of molecules in the gas phase, as well as the authors' other work simplifying exoplanet climates, "is indeed quite a big deal," he added — "It's a clever formulation that will speed up and improve the quest to pin down what's in planetary atmospheres" for a wide range of hotter atmospheric temperatures, he said.

Heng's group isn't the first to create simplified equations to describe an atmospheric makeup, but their calculations consider "the abundances of some of the most important molecules in exoplanet atmospheres, which can then easily and quickly be evaluated in an atmosphere model," David Amundsen, a researcher at Columbia University and NASA Goddard Institute for Space Studies, told Space.com in an email. While detailed atmosphere models will have to take a lot of other factors into account, this can simplify one part of the calculations — exactly how much one might expect of each gas in the atmosphere.

And if some planet doesn't show an expected balance, does that mean something more interesting is going on?

"That's the million-dollar question, isn't it?" Heng said. "Because the classical thinking behind finding life is to first detect oxygen, ozone and water, and try to figure out if they're out of chemical equilibrium." If they are, he said, you search for other physical or geological causes for the disparity.

"And after you've exhausted these possibilities, then you dare start thinking about life," he added.

The new work was accepted to be published by The Astrophysical Journal.