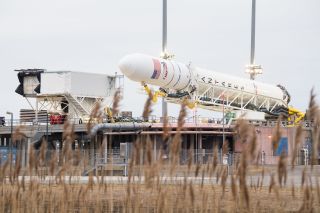 Northrop Grumman will launch a Valentine's Day NASA care package to astronauts on the International Space Station today (Feb. 14) and you can watch the action live online.

An uncrewed Cygnus cargo ship, which has been delayed since Sunday (Feb. 9), is scheduled to launch on an Antares rocket from the Mid-Atlantic Regional Spaceport at NASA's Wallops Flight Facility on Wallops Island, Virginia. Liftoff is set for 3:43 p.m. EST (2043 GMT).

You can watch the Cygnus launch live here and on Space.com's homepage, courtesy of NASA TV. NASA's webcast will begin at 3:15 p.m. EST (2015 GMT).

Northrop Grumman initially tried to launch the Cygnus cargo mission, called NG-13, just after sunset on Sunday, but a sensor issue on ground equipment forced a delay. Foul weather prevented launch attempts for much of this week, but conditions appear to be improving, NASA officials said.

The odds of good weather at launch time are about 80% for Friday, with thick clouds and ground winds the main concerns, NASA officials said. Those weather odds improve to a 95% chance of good conditions on Saturday (Feb. 15), but drop back to 80% on Sunday, if needed.

The Cygnus NG-13 spacecraft is carrying 7,600 lbs. (3,400 kilograms) of experiment gear, food and other supplies for the three-person Expedition 62 crew on the space station. If all goes well, the spacecraft should arrive at the station on Sunday (Feb. 16).

NASA TV will provide live coverage of the Cygnus-13 spacecraft's arrival at the station, beginning at 2:30 a.m. EST (0730 GMT).