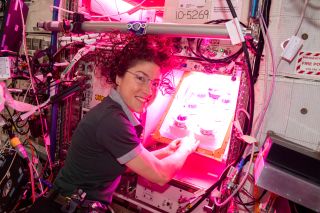 On long space voyages, food variety will be key.

A new NASA experiment called Veg-PONDS 02, which astronauts just ran on the International Space Station, offers a chance to attain that variety. While the experiment used a food already grown in space — romaine lettuce — future crops could include tomatoes or other plants, NASA officials said in a statement.

Past food experiments on the International Space Station used seed bags (also called pillows) that receive water from syringes, which astronauts push into the bags. While this water is enough for lettuce to grow, tomatoes and similar crops use more water. So NASA initiated a 21-day test, which ended May 16 — one that may eventually give space station astronauts more fresh food to eat.

The new method lets astronauts cultivate romaine lettuce seeds in 12 passive orbital nutrient delivery systems (PONDS). PONDS units are less expensive than the seed bags and can hold more water, while providing more room for roots to grow. Another advantage of PONDS is that it uses less power, meaning that electricity can be used for other items on the space station. Six of the 12 PONDS units will be returned to Earth on a future SpaceX mission for further analysis. Later, the PONDS design will be finalized to test how to grow crops besides romaine lettuce, NASA officials said in the statement.

More nutritional variety will be needed for space voyagers on their way to Mars or other distant destinations. While the space station orbits Earth, astronauts heading farther into space will need to bring more of their supplies with them, since it's not cost- or time-effective to keep resupplying crews at a distant location.

"There comes a point where you have longer and longer duration missions, and you reach a cost-benefit point where it makes sense to grow your own food," Howard Levine, chief scientist of NASA's Utilization and Life Sciences Office at the Kennedy Space Center, said in the statement.