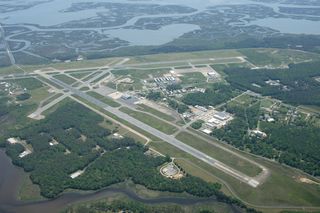 The NASA Goddard Space Flight Center's Wallops Flight Facility is a rocket launch site on the eastern shore of Virginia. The site includes the Mid-Atlantic Regional Spaceport, which can send off interplanetary and International Space Station missions.

Wallops has hosted more than 16,000 rocket launches, according to a NASA fact sheet dating from about 2014. These rockets initially sent aloft satellites, technology development payloads, science experiments and aircraft models, among other things.

In recent years, the facility has expanded to include flights that go even farther. One of the first notable flights of this era was LADEE (The Lunar Atmosphere and Dust Environment Explorer), which launched from the facility in 2013.

The center was created in 1945 for suborbital rocket research. At the time, scientists were studying the upper atmosphere to prepare for eventual space missions. With the first Soviet satellite not launching until 1957, and the first American satellite not until 1958, these suborbital rocket flights, balloons and aircraft were the only means by which scientists could understand parameters such as wind speed, temperature and solar effects in the atmosphere.

The facilities at Wallops were initially managed by the National Advisory Committee for Aeronautics under the Langley Research Center. NASA was established in 1958 and took over Langley and other NACA facilities. The Wallops facility operated under NASA headquarters in Washington, D.C., until it became part of the nearby NASA Goddard Space Flight Center in 1981.

By the mid-1990s, according to Popular Mechanics, there were few launches at Wallops and it appeared at risk of being shut down. In 1997, however, the Virginia Commercial Space Flight Authority (also known as "Virginia Space") was granted a license to operate a commercial spaceport at Wallops, alongside NASA. Virginia Space had a reimbursable Space Act Agreement with NASA to use the land at Wallops, and also obtained a Federal Aviation Administration license to launch into orbit.

Since then, according to Virginia Space, it has been working on expanding the Mid-Atlantic Regional Spaceport, also known as MARS. Today, MARS has two launch facilities (one for mid-class rockets, and one for small-class rockets), as well as associated infrastructure.

LADEE was the first U.S. moon mission ever sent from a location other than Florida. But its departure from Wallops required many upgrades, according to a NASA press release at the time. Building U-40 was converted into a launch control center, in part because it used to be used for the same purpose many years before. The V55 spacecraft fueling facility also was transformed into a clean room ready to send LADEE out for the launch.

"This building presented several challenges given that it was set back in the woods — making 'critter control' difficult at best," NASA wrote. "The RMMO [Range and Mission Management Office] project manager worked closely with NASA's Code 500 engineering personnel, who took the lead on updating this facility. In the end, the LADEE spacecraft was provided a safe and clean temporary home while it underwent final processing for its journey to the moon."

International Space Station flights began departing from Wallops in 2013, when Cygnus spacecraft (managed by a company now known as Orbital ATK) began supply runs to the orbiting complex. In 2014, an Orbital ATK Antares rocket exploded on Pad-0A during a launch, taking with it a Cygnus spacecraft bound for the ISS. This forced a year's worth of repairs to the pad, which cost about $15 million.

"Those repairs included the replacement of four lightning towers around the launchpad, the removal of debris from the explosion, as well as environmental cleanup of water and topsoil contaminated by rocket fuel," according to a Space.com story from 2015, after the repairs were completed. "The explosion itself carved a crater 50 feet wide (15 meters) and 30 feet (9 m) deep just to the side of Pad-0A."

Here are some of the other notable programs at Wallops, according to NASA (this does not include items such as range monitoring or ground networking):

NASA Sounding Rocket Program: An Earth and space science research program that is used for space programs, the Department of Defense, other government agencies and the scientific community at large. Fields of research include solar physics, planetary atmospheres and high-energy physics. More than 2,500 missions have been launched under this program.

Scientific balloons: While Wallops mainly launches its balloons at other facilities, the NASA Balloon Program Office is located at the facility. Roughly 25 scientific balloons are sent out every year from areas such as Palestine, Texas, Sumner, N.M. and other countries.

Small launch vehicle research: This is an office that is trying to make it easier for small payloads to launch into space, by providing support all the way from preparing the payload to helping it in orbit.