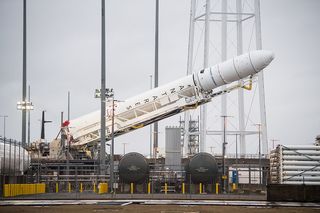 The Antares rocket and Cygnus capsule headed to the International Space Station on Feb. 9, 2020, was raised to vertical position on a launchpad at NASA's Wallops Flight Facility in Virginia.
(Image: © NASA/Aubrey Gemignani)

NASA is launching a bevy of crew supplies and scientific cargo to the International Space Station Sunday (Feb. 9) from NASA's Wallops Flight Facility in Virginia.

Perched atop an Antares rocket will be a Northrop Grumman Cygnus cargo spacecraft, and tucked inside will be nearly 8,000 lbs. (3,600 kilograms) of supplies and hardware. The capsule will bring supplies for the crew currently living on the space station.

Also onboard the spacecraft will be a variety of experiments and pieces of research equipment. These will support investigations on topics including tissue and cell cultures and biofuels.

A new miniature biology lab is headed to the space station on the Cygnus capsule. Dubbed the Mobile SpaceLab, the system is a technology-demonstration project that scientists hope could demonstrate a new way to conduct experiments in orbit. That's because Mobile SpaceLab is a tissue- and cell-culturing facility designed to function autonomously, running an experiment for up to one month without using precious astronaut time.

Developed by HNu Photonics, a Hawaii-based engineering company, the Mobile SpaceLab will offer researchers a quick-turnaround, automated platform to conduct cutting-edge biology experiments in microgravity. The facility is remote-operated by crews on the ground, and the automation enables researchers to observe cellular functions with a technique called microscopy.

The ability to observe cell cultures in microgravity will provide the researchers with real-time data about how tissues behave in space. Microgravity better mimics how a cell behaves in the human body than any artificial environment on the ground.

During this initial mission, the team is sending up neuroblastoma cells — a type of nerve-cell cancer. Specifically, the experiment will study how cells mature, which biologists call cellular differentiation, and how microgravity affects that process.

"Gravity is a fundamental force that we're all subjected to here on Earth," Devin Ridgley, chief scientist at Scorpio-V, said during a NASA news conference held on Jan. 29. "It can have a drastic effect on how a cell differentiates, which affects cellular organization and communication and can lead to cognitive decline." He added that the experiment could help scientists better understand the effects of space travel on the brain.

A team from the University of Alaska will be sending a batch of genetically engineered E. coli bacteria to the space station. Here on Earth, the organisms can produce a compound called isobutene, which is a precursor to plastic and rubber and can be used on its own as a biofuel.

These bacteria can produce isobutene by feeding on wastewater, manure and the mess left over from corn harvests. So, using bacteria to make the material would sharply contrast with current methods of making isobutene, which require high-energy chemical reactions and petroleum-heavy ingredients.

But the bacteria make only very small quantities of the compound, so researchers want to identify how the organisms produce isobutene, in hopes of genetically increasing production rates. To better understand how this process works, the researchers will look at a group of genetically enhanced E. coli and study how effectively the bacteria produce isobutene compared to their terrestrial counterparts.

The bacteria’s metabolic activity changes in microgravity, so the researchers are trying to test whether the bacteria make more or less isobutene in space. If the scientists understand how the bacteria produce isobutene, they can genetically engineer bacteria that are more efficient, reducing the need for energy-intensive, chemical processes. This will ultimately cut down on environmental pollution, the researchers have said.

Millions of Americans lose bone mass each year due to an imbalance of bone remodeling, when the body doesn’t make new bone as quickly as it absorbs older bone. The disease, called osteopenia, is the beginning of osteoporosis. Our bones have a process by which they naturally form and dissolve bone matter equally, but sometimes this process gets out of whack.

Imbalances can occur when the body is stressed, like what happens in microgravity. So, scientists want to use the space station to develop treatments to mitigate these effects, both on Earth and in space.

"Astronauts lose 1 to 2.5% of their bone mass per month," Louis Kidder, a bone biologist at the University of Minnesota and co-investigator on the project, said during the news conference. "That would take a year with osteoporosis."

He added that the microgravity environment of the space station allows for a better understanding of how bone cells respond to varying amounts of gravitational force. The group will send up osteoblasts (bone cells) to study how they react to microgravity, comparing that result to a ground-based group's behavior.

The ground-based cells will be in a magnetic levitation device that will simulate the conditions of space. If it proves to be an effective simulator, it could help researchers here on Earth better understand bone loss and enable them to develop more therapies to mitigate loss — without the need for a rocket.

"The loss of bone in microgravity is accelerated compared to Earth," Bruce Hammer, a radiologist at the University of Minnesota and co-investigator on the project, said during the news conference. "With this [experiment], we can look at the mechanisms and possible therapies."

That's only a sampling of the research investigations launching aboard Cygnus. A new plant-growth experiment will look at how cowpeas, also known as black-eyed peas, and common beans grow in microgravity, as part of NASA's continuing efforts to grow food in space.

Another new study will test how radiation and microgravity affect the relationship of a virus and the bacterium it infects. The researchers hope that this study will lead to new antibacterial treatments.

Cygnus will also carry a new fire experiment, called Saffire IV, which will study how flames grow and react in a variety of pressures and oxygen concentrations. Previous iterations of this experiment have looked at how flames spread across specific materials that would likely be found on a spacecraft. This experiment will take that further by testing flammability at lower pressures and higher oxygen concentrations, to most closely mimic space conditions. The experiment will also test methods for detecting fires and for cleaning up their aftermath.

This is the second Cygnus flight under Northrop Grumman's Commercial Resupply Services 2 contract and is the first cargo delivery to the space station this year. You can watch the launch here at Space.com Sunday (Feb. 9), with blastoff targeted for 5:39 p.m. EST (2239 GMT).