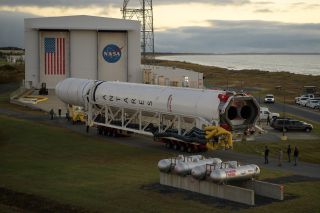 The Northrop Grumman Antares rocket that will launch the Cygnus NG-12 cargo resupply mission to the International Space Station rolls out of the Horizontal Integration Facility to the launch site at NASA's Wallops Flight Facility in Virginia on Oct. 29, 2019.
(Image: © Bill Ingalls/NASA)

An Antares rocket is set to launch a bevy of crew supplies and scientific cargo to the International Space Station this upcoming weekend (Nov. 2) from NASA's Wallops Flight Facility in Virginia.

Perched atop the rocket will be a Northrop Grumman Cygnus cargo spacecraft, and tucked inside will be approximately 8,200 lbs. (3,700 kilograms) of supplies and hardware. The craft will ferry supplies to support the crew on the space station as well as a variety of experiments and research equipment. These will support investigations in topics ranging from radiation mitigation to rover control to materials recycling.

One of the dangers of deep-space travel comes in the exposure to damaging radiation. Unpredictable space weather, in particular solar-particle events such as coronal mass ejections (or CMEs), can expose astronauts to enough radiation to potentially cause long-term adverse health effects. One experiment aboard the Cygnus, the AstroRad Vest, aims to help NASA mitigate those damaging effects.

The AstroRad vest is a garment designed to help shield astronauts from radiation while traveling in space. It is made out of HDPE (high-density polyethylene) and will be tested by the crew currently onboard the space station. Although the vest is designed for use farther out into space, the space station is the perfect environment to test whether astronauts wearing the AstroRad garment will be comfortable and able to carry out their daily activities in space. Astronauts will record data on how easy the vest is to put on and how it fits, as well as the range of motion it allows.

Made In Space, a California-based company that specializes in off-world manufacturing, is also sending up an experiment that will test a new facet to their 3D printing abilities: recycling. The company that pioneered 3D printing in space will now attempt to recycle the plastic materials it prints by breaking them back down into polymers to be made into plastic filaments that can be used again. This will enable more tools to be printed without having to rely on material resupply shipments from Earth.

"The recycler is a facility that will break everything down and turn the used polymers back into feedstock," Michael Snyder, chief engineer at Made In Space, explained during a prelaunch science briefing on Oct. 17. "This way, we don't have to continually launch polymer and filament."

Snyder added that the company plans to analyze samples printed in space after these materials return to Earth, where they can be compared to samples printed on the ground.

When astronauts land on the moon or Mars, they might be accompanied or preceded by robotic companions sent to help look for resources, build potential habitats and much more. Analog-1, an investigation spearheaded by the European Space Agency that is headed to the space station with this launch, will explore how humans can best operate and communicate with robots off world.

Astronauts onboard the space station, will investigate how well they can remotely by control a rover back on Earth. During this investigation, astronaut Luca Parmitano will maneuver a robotic arm to select, collect and store geologic samples with the help of communication with an Earth-based team. He will also navigate the rover along a specific path.

NASA added during the teleconference that this research will benefit the upcoming Artemis program and the Lunar Gateway, as astronauts will likely be controlling rovers on the lunar surface while in orbit around the moon.

Also onboard Cygnus will be the Zero-G Oven, which astronauts will use to bake cookies in space for the first time. Who doesn't enjoy the aroma of fresh-baked cookies? On future long-duration space missions, such fresh-baked food could have psychological and physiological benefits for crewmembers, enabling them to prepare more-nutritious meals. In testing this oven, astronauts will examine heat-transfer properties and the process of baking food in microgravity. The device has a specially designed toaster-like shape with a top temperature of 685 degrees Fahrenheit (363.3 degrees Celsius).

The upcoming flight is the first within the second phase of Northrop Grumman's contract with NASA for commercial-cargo delivery services. The Cygnus spacecraft is utilizing some shiny new upgrades it received prior to the last launch, including the ability to accommodate late-load payloads. This means the craft will be able to carry life sciences payloads, including a crew of rodents, to the space station.

The Rodent Research-14 experiment, an investigation into how microgravity disrupts the body's 12-hour circatidal clock, will explore how disruptions to daily light cycles affect human cells and organs by studying changes in rats. (Rats are one example of a model organism — a non-human species that are used to help understand biological processes in our own species). During the pre-launch briefing, researchers explained that genes associated with 12-hour light and dark phases, or the 12-hour molecular clock, are also associated with the most common form of human liver disease, which contributes to insulin resistance and diabetes.

Understanding the 12-hour clock's role in influencing liver function could have major implications for maintaining human health. Researchers are hopeful, it was noted in the teleconference, that the results from this study could provide insights into liver disease and could lead to new treatments.

Cygnus will also carry equipment that will support an experiment already onboard the space station: the Alpha Magnetic Spectrometer - 02 (AMS-02), a scientific instrument affixed to the station's exterior that's designed to look for evidence of dark matter.

Roughly 15% of the universe is made up of "ordinary matter," or material we can see, while the rest consists of a mysterious substance called dark matter. Scientists cannot directly observe this enigmatic material, as it does not emit light or energy.

In 2011, the AMS-02 launched aboard the space shuttle Endeavour to scan the cosmos in search of dark matter. Three of the instrument's four cooling pumps have failed over the years, but because the aging instrument has served the scientific community so well, NASA wants to repair the AMS-02. The agency plans to conduct some on-orbit repairs through a series of spacewalks during which astronauts will cut and reconnect fluid lines in space for the first time.

During Thursday's briefing, researchers said that the planned repairs could give the valuable instrument as many as 10 more years of functionality.