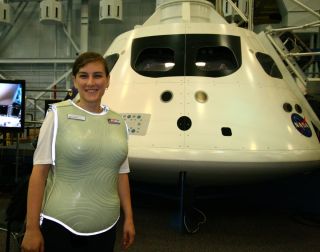 Tel Aviv-based StemRad collaborated with NASA’s prime contractor for the Orion crew-carrying spacecraft, Lockheed Martin, to adapt its technology for use in space. On EM-1, which is currently scheduled to launch in late 2019, Orion will launch atop SLS, kicking off a three-week mission that will take the capsule beyond the moon.

The threat of radiation exposure is high on such deep-space journeys, posing potentially significant dangers to crewmembers.

That's where AstroRad comes in. During the EM-1 test, Orion will carry two test dummies, each of which contains thousands of radiation detectors. One dummy will be naked and the other will wear an Astrorad vest. (These dummies will be supplied by the German Aerospace Center.)

While Orion is unlikely to encounter a powerful solar storm during the relatively brief EM-1 mission, the spacecraft will pass through the Van Allen radiation belts, zones of energetic charged particles that emanate from solar winds. So AstroRad will get a trial in high-radiation conditions, project team members said.

If the test is successful, AstroRad will be used on crewed missions to deep space. Additionally, the vest is expected to be used aboard the International Space Station beginning in 2019 for advanced ergonomic studies in microgravity.