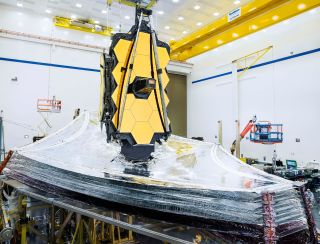 As many NASA centers switch to mandatory telework to confront the spread of COVID-19, NASA leadership acknowledged that prized science missions may suffer delays and that the agency was prepared to make that trade in order to keep its employees safe.

Among the missions affected is the James Webb Space Telescope, where work is now on hold, NASA officials said Friday (March 20).

Questions about NASA's response to the coronavirus pandemic reigned during a Science Mission Directorate digital town hall held on Friday. The event had been arranged to allow Associate Administrator Thomas Zurbuchen and several division leaders to summarize and address questions about President Donald Trump's budget request for the 2021 fiscal year, which begins on Oct. 1. As it turned out, that discussion took second place on the agenda.

"What we're going to do in this call is use what I call the elephant principle: If there's an elephant in the room, we'll talk about it," Zurbuchen said during his opening remarks. "We're going to talk about COVID activities and how it affects us here in science. And then, as we do all day, we will go back to business."

Zurbuchen noted that different types of activities will be affected differently by the telework guidelines. Some work, like developing the requirements that missions must meet to be considered successful, is straightforward to do remotely; constructing a spacecraft is not. He noted that aircraft-based science flights have already been postponed indefinitely, although he emphasized that those flights are not canceled and will be rescheduled when the pandemic is more contained.

Even NASA's most prized missions currently in development could see serious impacts from COVID-19 containment measures, Zurbuchen said. "Many people have asked us about James Webb," he said, referring to the agency's over-budget and much-delayed massive space telescope project.

That spacecraft is currently scheduled to launch next March, although a January report from the Government Accountability Office suggested that the project had just a 12% chance of meeting that timeline, even without the pandemic. "Of course it will be impacted, even though it's one of our top priorities, as we've said repeatedly; personnel for integration and testing work has been reduced already," Zurbuchen said.

Just hours after the town hall concluded, NASA announced that it was pausing — at least temporarily — work on the Webb space telescope. The instrument is currently in California, the governor of which on Thursday (March 19) instituted mandatory restrictions keeping his residents in their homes for the foreseeable future except for essential errands.

The coronavirus containment measures could also interfere with NASA's next Mars mission, which is scheduled to launch in July and includes the Perseverance rover and an experimental helicopter. The main spacecraft is already in Florida, but prelaunch assembly is not yet completed and the rover's power supply has not yet arrived. "Mars 2020 is another top priority, and the teams are doing frankly heros' work to keep us on track," Zurbuchen said. "Both missions are priorities but they're very different as far as their situation and decisions that need to be made."

Beyond those two missions, Zurbuchen avoided discussing the impacts coronavirus response measures may have on specific projects, instead emphasizing that NASA decisions would respond to the pandemic as needed. "We're in a state of flux," he said. "This remains fluid."

During his remarks, he also strove to emphasize that NASA's focus was on meeting the needs of its personnel's physical and mental well-being. Zurbuchen acknowledged that some NASA staff will be dealing with other complications, like taking care of children home from school or getting back to family they have been working away from, and that the situation is continuing to change.

He also directed a few encouragements specifically to graduate students and other early-career professionals. "We do not want this to be a kind of a fork in the road career-wise, a fork in the road for you that is imposed from the outside," he said. "We're all together on this and committed to coming out the other side as a stronger community and one that is not weeding out our friends that we really need to lead in the future."

The unspoken question underlying his remarks, of course, was what that future might look like. "We're all affected by this, all of our missions are affected by this," Zurbuchen said. "Most of the missions, there's nobody working hands-on anymore at NASA facilities."