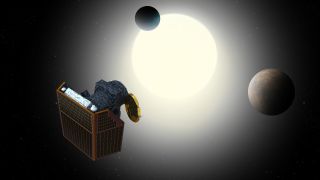 Update for 3:50 a.m. EST on Dec. 17: The planned launch of the CHEOPS exoplanet mission on Dec. 17 was postponed because of an issue at the beginning of the countdown sequence. A new target date has not yet been announced.

A European exoplanet-hunting satellite is set to soar into space early Tuesday (Dec. 17), along with a few other satellites, and you can watch it all live.

The European Space Agency's CHEOPS exoplanet telescope (the name is short for Characterising Exoplanets Satellite) will focus on bright stars that are already known to host planets. These important follow-up observations will help astronomers better understand the orbits of the planets and their approximate sizes.

CHEOPS will launch on an Arianespace Soyuz rocket from the Guiana Space Center at Kourou, French Guiana. Liftoff is scheduled for 5:54 a.m. local time (3:54 a.m. EST or 0854 GMT).

Knowing a planet's diameter helps astronomers determine whether a planet is more likely to be rocky or gaseous, for example, which is important to know for habitability estimates.

The mission is planned to last for 3.5 years.

CHEOPS won't be launching by itself. Arianespace, which is coordinating the launch, has four other payloads nestled into the Soyuz. The largest of these is the COSMO-SkyMed Second Generation satellite, an Earth-imaging satellite run by the Italian Space Agency and Minister of Defense.

Three smaller payloads will also be onboard.

The French national space agency will be launching ANGELS (Argos Neo on a Generic Economical and Light Satellite) in partnership with an industrial group called Hemeria. The satellite will gather signals produced by beacons around the globe and precisely identify where the beacons are located using much smaller technology than currently does so.

Another payload from the French national space agency, called EyeSat, will study the Milky Way and "zodiacal light" at night (which is thought to be reflected light from dust and ice particles).

The final passenger, OPS-SAT, is an experimental satellite for the European Space Agency's mission control. The agency and member countries will be able to test new software on the platform, including dozens of experiments.

This launch is expected to be the ninth and final mission in 2019 for Arianespace.