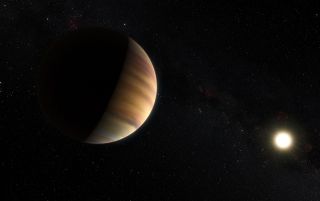 An artist's impression of the first planet orbiting a sunlike star beyond the solar system, 51 Pegasi b, a massive gas giant orbiting its planet every 4 days.
(Image: © ESO/M. Kornmesser/Nick Risinger (skysurvey.org))

With thousands of exoplanet candidates discovered, astronomers are starting to figure out how to group them in order to describe them and understand them better. Many planet classification schemes have been proposed over the years, ranging from science fiction to more scientific ones. But we still know little about exoplanets, and some scientists still debate what the definition of a planet should be.

What is a planet?

Before discussing how to classify planets, it's important to understand what a planet is. The International Astronomical Union came out with an official definition in 2006, but that definition has remained controversial. The definition states that a planet is a celestial body that

The definition arose after astronomers, including California Institute of Technology astronomer Mike Brown, found several small worlds at the edge of the solar system. These bodies were approximately the size of Pluto, which was then considered a planet. With a new definition, the small worlds and Pluto were grouped into a new category called "dwarf planet."

The decision did not meet with universal approval. Alan Stern is the principal investigator of the New Horizons mission to Pluto, which flew by the world in 2015. He has repeatedly argued that the phrase "cleared the neighborhood" is vague and does not account for the fact that, for example, Earth has many asteroids in its orbit. Further, the New Horizons pictures of Pluto showed a surprisingly complex world that includes mountains, frozen lakes and other features – which he again argued makes it more like a planet.

The IAU responded to the New Horizons discoveries as follows: "These results raise fundamental questions about how a small, cold planet can remain active over the age of the Solar System. They demonstrate that dwarf planets can be every bit as scientifically interesting as planets. Equally important is that all three major Kuiper belt bodies visited by spacecraft so far – Pluto, Charon, and Triton – are more different than similar, bearing witness to the potential diversity awaiting the exploration of their realm."

In 2017, a group of scientists, including Stern, proposed a new definition of planet, which they plan to submit to the IAU: "A planet is a sub-stellar mass body that has never undergone nuclear fusion and that has sufficient self-gravitation to assume a spheroidal shape adequately described by a triaxial ellipsoid regardless of its orbital parameters."

The urge to classify planets has increased since exoplanet discoveries became more frequent. The first confirmed exoplanet discovery was in 1992, with the discovery of PSR B1257+12 around a pulsar star; the first main-sequence star discovery (51 Pegasi b) was found in 1995.

Since then, thousands of exoplanet candidates have been found, most of them with the Kepler Space Telescope. While Kepler's mission is focused on finding planets like Earth orbiting in the "habitable zones" (where liquid water may exist on the planet's surface) of their stars, the telescope has discovered a wide variety of planets.

Many of the exoplanets discovered early on were so-called "hot Jupiters," large gas giants that orbit very close to their parent star. Some planets are very old, such as PSR 1620-26 b (nicknamed Methuselah as it's only 1 billion years younger than the universe itself.) Some planets are so close to their parent star that their atmosphere is evaporating, such as the case of HD 209458b. Further, planets have been found orbiting two, three or even more stars.

With such a wide range of planets, it is perhaps understandable that there is no single classification system for all planets. For the most part, astronomers focus on the degree to which planets may be habitable, which is perhaps best demonstrated with the Habitable Exoplanets Catalog. This is a list of the most promising habitable planets as determined by experts at the University of Puerto Rico at Arecibo's Planetary Habitability Laboratory (PHL).

The challenge is, habitability is usually defined solely by a planet's orbit and mass. Telescopes of today are not sensitive enough to look at atmospheres except for the very largest and closest planets. That said, observatories of the future may be able to examine atmospheres directly. The James Webb Space Telescope, which launches in 2018, should be capable of looking at certain planets' atmospheres, although it's unclear how much information it can obtain about smaller, rocky planets close to Earth's mass.

The word "planet" comes from a Greek word meaning "wanderer", meaning that the planets wander in Earth's sky compared with the (relatively fixed) stars. Planet movements were known by all ancient cultures, but they were limited to those that could be seen with the naked eye: Mercury, Venus, Mars, Jupiter and Saturn. The discoveries of Uranus and Neptune came after the telescope was used in astronomy starting in the 1600s.

In our own solar system, astronomers typically distinguish between "rocky" planets and "gas" planets. The rocky planets are Mercury, Venus, Earth and Mars. They have small atmospheres compared with their size, and are closer to the sun.

Long-standing theory is that when the sun was young and the solar system was just forming, radiation blew most of the gas to the outer solar system, depriving these planets of the chance to pick up a lot of atmosphere. However, other solar systems have huge, gassy exoplanets close to their parent stars. Perhaps these exoplanets migrated, or perhaps the formation theory needs tweaking.

The gas planets in our solar system are Jupiter, Saturn, Uranus and Neptune, although there are vast differences among them. Uranus and Neptune still have rocky cores (as best as theory can tell), but have very large atmospheres compared with those cores. While the cores of Jupiter and Saturn also remain enigmatic, physics predicts that because of the planets' much larger size relative to Uranus and Neptune, the cores may be liquid-metallic – or perhaps more solid. More study will be needed.

Sometimes, planets in our solar system are classified with their position relative to the asteroid belt, which lies approximately between Mars and Jupiter. With this scenario, "inner" planets are Mercury, Venus, Earth and Mars. "Outer" planets are Jupiter, Saturn, Uranus and Neptune.

Perhaps the most famous attempt at exoplanet classification is that used by "Star Trek." A habitable planet like the Earth is referred to as an M-class planet; often, members of the crew would call out that they were orbiting an M-class planet, or this would be noted specifically in a captain's log.

The Planetary Habitability Laboratory lists several "obscure" examples of classification, as well as more scientific examples. Of the more scientific examples, the suggestions include using mass as a classification scheme (Stern and Levison, 2002) or the abundance of elements more important for life (Lineweaver and Robles, 2006). Stern and Levison further argue, according to PHL, that "any classification should be physically based, determinable on easily observed characteristics, quantitative, uniquely, robust to new discoveries, and be based of the fewest possible criteria."

PHL also has a proposed classification scheme that uses mass as a basis — a metric that can be obtained with today's telescopic observations. Mass can be estimated based on radial velocity measurements obtained by instruments such as the HARPS (High Accuracy Radial velocity Planet Searcher) spectrograph at the European Southern Observatory's La Silla 3.6m telescope. Simply put, this method measures the "tug" a planet exerts as it goes around its parent star, providing an estimate of the mass.