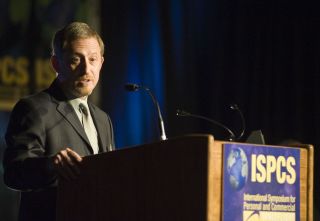 BOULDER, Colo. — This past July, NASA's New Horizons spacecraft provided the first good looks at Pluto, and the piano-size probe might not be done exploring the solar system's outer reaches.

New Horizons performed the first-ever flyby of Pluto on July 14, revealing the dwarf planet to be a complex and diverse world with tall mountains, nitrogen-ice glaciers and some areas of surprisingly young terrain.

The spacecraft is now cruising through the frigid Kuiper Belt — the ring of bodies beyond Neptune's orbit —  and could make even more history during a potential extended mission. If the mission is approved by NASA, the craft will fly by and study a small Kuiper Belt Object (KBO) about 1 billion miles (1.6 billion kilometers) beyond Pluto in January 2019. [NASA's New Horizons Pluto Mission in Pictures]

Space.com recently sat down with New Horizons principal investigator Alan Stern, of the Southwest Research Institute here in Boulder, Colorado, to discuss the historic mission and what lies ahead.

Space.com: New Horizons and the Pluto encounter got a huge amount of public attention. Why do you think this generated so much buzz?

Alan Stern: People wanted to hear about the inside story, and it says that people love exploration — first-time exploration and reconnaissance. Years ago, when we were starting to plan the public outreach around the encounter, we calculated what fraction of the U.S., and presumably the world, had never seen a first encounter with big real estate [a big object in the solar system]. It turned out that almost half the people in the U.S. had never seen anything like this — where you turn a point of light into a planet right before everyone's eyes. It made a huge impact on people, and I'm really happy about that.

Space.com: Can that interest be transformed into political action and more NASA dollars for exploration?

Stern: That's up to NASA's leadership. I think New Horizons, the spacecraft, the team and the planet all did our part. The spacecraft performed flawlessly. And Pluto is endlessly interesting. Our team worked their tails off to be ready for the encounter in every way — technically, programmatically and from the standpoint of public engagement.

Space.com: New Horizons is toting a lot of data, still to be sent back to Earth. What should we be looking for in the future in terms of data milestones?

Stern: The spacecraft is pregnant with a lot of data. We get about a gigabyte to the ground every week.

Space.com: When does that end?

Stern:Next fall, but [I] can't give you a day. It depends on negotiating Deep Space Network time a year from now. But it'll end roughly in September-October next year. At that time, we'll have all the data down.

By the way, we send the data back to Earth in priority order. We agreed with NASA a long time ago that group 1 was the highest priority, then group 2 and group 3. The general idea was to get the juiciest data sets to the ground first and start working with them. That way, if something unexpected happened — say, we lost the spacecraft, which is unlikely — but if that were to happen, at least the most valuable data is off the bird first. [Photos of Pluto and Its Moons]

Space.com: How's it looking for the reach to a KBO?

Everybody understands that's the centerpiece of an extended mission. Second of all, there is more science en route, as we are going to pass close enough to about 20 KBOs to study them. We won't get detailed pictures of those, but we will get scientific data on their surface properties, how many satellites they have, things like that. The one we're flying to New Horizons will be close enough to pick out building-size structures.

Space.com: Why is exploration of KBOs important?

Stern: We really know very little about objects this size. They are going to help us connect the dots of accretion [that is, how planets form]. And the great thing about the Kuiper Belt is that it's colder than hell out there. So it's a wonderful environment to preserve information about the origin of the solar system. Going to the Kuiper Belt is like an archaeological dig into the history of the solar system.

Space.com: While the Pluto encounter was dramatic, the New Horizons team had a pre-encounter scare. Can you describe that moment?

Stern: That was our Apollo 13 moment, and I said that because it's understandable to the public what was meant by that. The comment sparked a social media conversation of space nerds. They claimed better analogies, seeing it more [as] a moment and not mission-threatening.

Space.com: So, what happened?

Stern: We were 10 days out after nine and a half years. [New Horizons launched in January 2006.] I got a call from Glen Fountain. He is the project manager for New Horizons at Johns Hopkins University's Applied Physics Laboratory. I've worked with him for 15 years. He started by saying, "Alan…" Before he finished those two syllables, I knew something was wrong. I could hear it in his voice. Continuing, he said, "We've lost the spacecraft."

Here we are at Pluto's doorstep. We had flown over 3,500 days, and we're going to lose it now? The first thing in my mind is that this can't be happening.

Our operations team diagnosed the problem, and then it was a recovery operation. And that's a much better situation to be in. The problem that had occurred was that our main flight computer had unexpectedly reset itself after becoming hung up in a software loop.

We simulated on our mission simulators different parts of the recovery. We had to make sure our commands would work. We needed to get switched over to the spacecraft's main computer, not the backup. Pluto encounter files that we had been putting on New Horizons for six months were lost. We had to put everything back.

Not to be overly dramatic, [but] we sent the calvary in ... in terms of sending these commands at the speed of light. There was some science that was lost. We got back on the timeline for the encounter.

It's a people story — people literally sleeping on the floor, staying all night, night after night. People buckled down and were totally committed to the spacecraft's recovery.

Somebody ought to make a movie.

Leonard David has been reporting on the space industry for more than five decades. He is former director of research for the National Commission on Space and is co-author of Buzz Aldrin's 2013 book "Mission to Mars – My Vision for Space Exploration," published by National Geographic with a new updated paperback version released in May 2015. Follow us @Spacedotcom, Facebookor Google+. Originally published on Space.com.