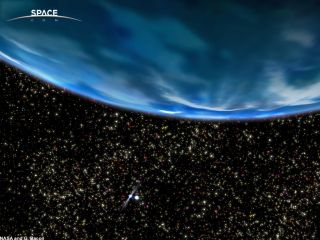 Artist's rendering of the oldest known planet, with the dense pack of stars in the globular cluster it calls home.
(Image: © NASA and G. Bacon (STScl))

More than 400 worlds have been found beyond the reach of our sun, and the tally is rising rapidly. From super-Earths to giants dwarfing Jupiter, our galaxy is a zoo of different kinds of planets.

The first discovery of an extrasolar planet around a sun-like star was 51 Pegasi B, an exoplanet roughly 50 light-years away, unofficially named Bellerophon after the tamer of the mythical Pegasus.

Like many alien worlds found after it, 51 Pegasi B was a "hot Jupiter," a gas giant as close or closer to its star than Mercury is to our sun, unlike "cold Jupiters" that orbit farther away such as Saturn or, naturally, Jupiter.

Of the 429 exoplanets discovered to date, 89 have been hot Jupiters, likely because their large size and proximity to their stars makes them easier to spot by current techniques.

The first true discovery of extrasolar planets came in 1994, when radio astronomers discovered worlds around the pulsar PSR B1257+12 some 980 light-years away in the Virgo constellation. A pulsar is not a normal star, but a dense, rapidly spinning remnant of a supernova explosion. As of 2007, three extrasolar planets have been confirmed in orbit around this pulsar.

The oldest exoplanet known yet, PSR B1620-26 b, nicknamed Methuselah, is also a pulsar planet, located 5,600 light years from Earth in the Scorpius constellation. Methuselah is roughly twice Jupiter's mass and is estimated to be some 12.7 billion years old, and it suggested planets as potential habitats for life arose early in the universe's history. It is also a circumbinary planet, orbiting around a binary system composed of the pulsar PSR B1620-26 A and the white dwarf WD B1620-26.

All these worlds cannot support life as we know it, permanently bathed as they are in the pulsar's high-energy radiation.

A super-Earth is a planet with a mass larger than Earth's, roughly up to 10 times greater. The first super-Earths ever found were two of the planets around PSR B1257+12.

Super-Earths might be more geologically active than our planet.

Astronomers at the Harvard-Smithsonian Center for Astrophysics suggest they experience more vigorous plate tectonics because they possess thinner plates under more stress. Such activity is essential to life as we know it, because it helps enable complex chemistry and recycles substances like carbon dioxide into the atmosphere, which keeps Earth warm.

In our solar system, planets for the most part have fairly uniform circular orbits. The exoplanets found so far, however, can have far more eccentric orbits, moving in close and then far from their stars. Where a perfect circle has an eccentricity value of zero, roughly half of exoplanets seen thus far have an eccentricity of 0.25 or greater.

These eccentric orbits can lead exoplanets to extreme heat waves. For instance, HD 80606b, which is about four times the mass of Jupiter and is located some 200 light-years from Earth, has an eccentricity of roughly 0.93, "so it goes from an orbital distance close to that of Earth's to come hurtling in well inside the orbit of Mercury, essentially getting blasted with a blowtorch every 111 days," said astronomer Charles Beichman, executive director of NASA's ExoPlanet Science Institute.

"One thing we're trying hard to understand now is whether planets with eccentric orbits are the unusual ones, or whether it's our system that's the oddball out," Beichman said. "These eccentric orbits would essentially lead planets to interfere with each other, scattering them around."

Hot Neptunes are planets some 10 to 20 times the mass of Earth's – about the mass of "cold Neptunes" such as Uranus and, naturally, Neptune – yet are as close or closer to their stars than Mercury is to our sun. The first hot Neptune discovered was Gliese 436b some 33.4 light years away in the constellation Leo, which orbits its star a thousand times closer than Neptune orbits our Sun. It might have a surface of "hot ice" – water that remains solid despite its heat because it gets compressed by the planet's gravity. So far about 25 hot Neptunes have been found so far, Beichman said.

There are two kinds of worlds that might be entirely covered with water. "One is a terrestrial Earth-like planet that's just covered with a lot more water than our world, like the Kevin Costner movie, but is otherwise still familiar," Beichman said. "Or you can imagine a hot Neptune which is almost totally composed of water that is close enough to its star to not be frozen, but instead have an ocean thousands of kilometers deep and perhaps an atmosphere like a gas giant's, with lots of hydrogen and water vapor."

Sometimes hot Jupiters or hot Neptunes live too close to their stars for comfort. Once their stars roast these exoplanets and rip at them with their gravity, they might blow the gas completely off them, leaving behind rocky cores scientists have dubbed chthonian planets or evaporated remnant cores. Their proximity to their stars could mean they are covered in lava.

The super-Earth COROT-7b may well be a chthonian planet, orbiting 23 times closer to its star than Mercury is to our sun. The first evaporating planet discovered, HD209458b, nicknamed Osiris, might be on its way to becoming a chthonian planet.

Normally planets are thought of as orbiting stars, but there are hints a number of bodies with the mass of gas giants might be free-floating. These might either have escaped from their suns or never had a star to begin with, born in star-forming regions without the mass needed to ignite.

Roughly a half-dozen candidate free-floating planets have been found so far, either still glowing from the heat released as their gravity contracts their mass, or from the rare times one passes in front of a star and magnifies the light from the background star. "It's not clear whether you call them planets because they formed as part of a planetary system and were subsequently ejected or formed as super-small brown dwarf stars with the mass of planets," Beichman said.

Although vast majority of the 429 exoplanets found to date have been gas or ice giants, it is likely that terrestrial exoplanets outnumber these behemoths, and upcoming missions may soon finally discover rocky worlds the size of Earth.

"This is the decade when the first real confirmed exo-Earths are likely to come," Beichman said. "We've already found objects three to five times the mass of Earth."

The Kepler mission launched in 2009 is already on track to finding such planets, he noted, and the James Webb Space Telescope currently scheduled to launch in 2014 will be able to characterize the atmospheres of at least a few super-Earths.

An obvious hope is to find a Goldilocks planet just right for life – a planet at the right distance from its star to not roast or freeze and just the right size to retain an atmosphere but not so large as to become a gas giant. "We're on a quest with a very high probability of success of finding a planet that's habitable or even inhabited with primitive life around other stars," Beichman said. "As we're progressing on that path, every time we round the bend along the way, we're finding fantastic new vistas."