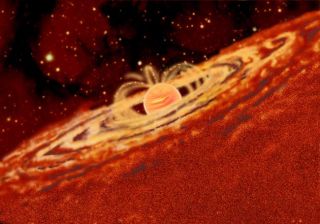 Artist rendering of a planemo, or planetary mass object, surrounded by a disk of gas and dust that could form satellites.
(Image: © Jon Lomberg, www.jonlomberg.com)

Planet-like objects floating alone through space harbor disks of material that could make other planets or moons, something like miniature versions of our solar system, astronomers said today.

What exactly to call any of these objects and systems is up in the air, however.

In one new study, six objects ranging in heft from five to 15 times the mass of Jupiter were observed. None are bound to stars. All are young and have disks of gas and dust that resemble disks found around young stars. Our own Sun had such a disk, out of which asteroids, comets and planets formed, theorists say.

The scientists involved in the new research are calling the objects "planemos," short for planetary mass objects that were born in the manner of stars and do not orbit normal stars.

"Now that we know of these planetary mass objects with their own little infant planetary systems, the definition of the word 'planet' has blurred even more," said study leader Ray Jayawardhana from the University of Toronto.

Observations at the European Southern Observatory (ESO) in Chile revealed infrared radiation from the dust disks. There are no conventional photographs of the objects. The results of this and a second, related study are being presented today at the 208th meeting of the American Astronomical Society in Calgary.

The new observations were of objects previously identified in work led by Katelyn Allers, then at the University of Texas at Austin. Allers used data from NASA's Spitzer Space Telescope.

The discoveries are not the first of their kind, however.

Last year, a group led by Kevin Luhman at Penn State found an isolated object about eight times the mass of Jupiter with an apparent disk of gas and dust. In a telephone interview today, Luhman said he prefers to use the term brown dwarf for all large, gaseous objects that are not orbiting normal stars. Brown dwarfs are generally considered to be much bigger than Jupiter but not massive enough to jumpstart thermonuclear fusion of hydrogen, the process that powers real stars and makes sunlight.

"I don't use the term planetary mass object," Luhman said. "They are really just brown dwarfs."

To understand the difference of opinion, one must first hear about the second new study, which further complicates the definitions.

In the other study, Subhanjoy Mohanty of the Harvard-Smithsonian Center for Astrophysics and colleagues looked at another so-called planemo and found evidence for a dust disk.

The object, named 2M1207b, was discovered in 2004 and controversially hailed then as providing the first picture of an extrasolar planet.

While clearly of planetary weight, at about eight times as massive as Jupiter, 2M1207b orbits a brown dwarf. Researchers suspect both objects formed at once by condensing out of an interstellar cloud of material-exactly how binary star systems are thought to form and unlike the typical process of planet birth.

Jayawardhana, who worked on this study too, said: "It is quite likely that smaller planets or asteroids could now form in the disk around each one."

By using the term planemo, the researchers are purposely avoiding the debate over whether 2M1207b and the free-floating objects should be called planets.

"Whether you call it a planet or not depends on your definition of the word 'planet,' whether it's a definition based on mass or one based on formation scenario," Jayawardhana told SPACE.com. "In any case, we have chosen to call it a planetary mass companion, rather than getting into a debate about how to define a planet."

Such a definition is the responsibility of the International Astronomical Union (IAU), which in recent years has been working-so far unsuccessfully-to draft language that defines planets both big and small.

If a planemo is a planetary mass object, however, then why are Jayawardhana and his colleagues describing the setups they've found as miniature solar systems rather than miniature Jovian systems?

"You can perhaps describe it as a big Jovian system too," he said.  "The reason we describe [them] as mini-solar systems is because the central objects probably formed more like stars than like planets."

Luhman, the Penn State astronomer, doubts the IAU will adopt the term planemo. He said it is so difficult to pin down the masses of these things that distinguishing between a planetary mass object and a certain brown dwarf is very challenging. It makes more sense, he said, to call them all brown dwarfs if they formed in isolation and are not true stars.

Whatever the terminology, the findings suggest a whole new world of cosmic possibilities.

"The diversity of worlds out there is truly remarkable," Jayawardhana said. "Nature often seems more prolific than our imagination."