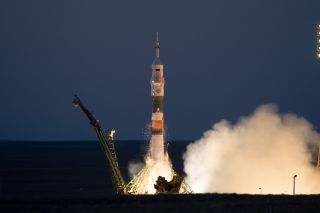 Launch of the Soyuz MS-05 mission from the Baikonour Cosmodrome on July 28, 2017. The mission used a Soyuz-FG rocket to take a crew to the International Space Station.
(Image: © European Space Agency)

Editor's note: A Soyuz rocket suffered an anomaly on Oct. 11, 2018, shortly after launching the Soyuz MS-10 spacecraft carrying NASA astronaut Nick Hague and Russian cosmonaut Alexey Ovchinin toward the International Space Station. The MS-10 made an emergency landing back on Earth, and both Hague and Ovchinin are safe. Learn more here:

The Soyuz rocket – not to be confused with the Soyuz spacecraft – is a line of Russian boosters that have seen variants fly since the mid-1960s. It is used for both cargo and astronaut transportation.

The Soyuz rocket is best known today for being the main form of transportation to the International Space Station. NASA bought astronaut seats on Soyuz spacecraft (which the rocket carries into space) starting in 2011, after the space shuttle program retired.

Another variant of the Soyuz rocket carries cargo to the ISS via regular Progress flights, which take place every few months.

Soyuz is one of the oldest rocket lines still in service, with its first launch dating to Nov. 28, 1966. Soyuz's heritage comes from the Vostok launcher that took the first Soviet astronauts into space in the early 1960s. It also has a legacy from the R-7a intercontinental ballistic missile, which conducted a couple of dozen test missions in the 1960s.

There are multiple variants of the Soyuz rocket, and the line has evolved many times over its history. Some current examples include the Soyuz-2.1a that is designed for ISS cargo, the Soyuz-FG that is designed to ferry astronauts to the ISS and the Soyuz-FG/Fregat that a European-Russian company called Starsem uses for commercial operations.

Most Soyuz rockets use RP-1 (a kerosene-based fuel) and liquid oxygen as propellant, although a variant known as the Soyuz-U2 used liquid oxygen and an RP-1 variant known as Syntin. The height, payload capacity and other characteristics of Soyuz depend on what variant is being used. Russia does not have a lot of easily accessible information available about different variants of the rocket, making it difficult to compare the types in terms of their payloads and physical dimensions.

The long heritage of Soyuz — some sources estimate it has flown over 1,700 times — makes it probably the world's longest-lived rocket line. It has had relatively few failures in hundreds of launches, making it an extremely reliable type of rocket. The history of the Soyuz line includes many dozens of crewed flights in support of the Salyut and Mir space station program, as well as the ISS. It also is a proven supplier of cargo to the ISS, with only a few failures across dozens of flights there.

While the vast majority of launches are successful, there have been a handful of failures during the rocket's long history. Notably, the human missions Soyuz 1 and Soyuz 11, which killed four astronauts between them, were both launched aboard Soyuz rockets. However, both of these missions failed due to problems during re-entry, not launch, so the rocket was not implicated in the disasters.

Here are some examples of Soyuz rocket failures from the last 20 years.

On Oct. 5, 2002, a Soyuz U exploded catastrophically 29 seconds after liftoff, during the launch of a Photon-M satellite. The European Space Agency says a ground crew member was killed, and eight people injured.

On June 21, 2005, a Soyuz rocket (carrying a Molniya military communications satellite) abruptly terminated its flight after six minutes. The second and third stages of the rocket, along with the satellite, crashed into the ground in Siberia.

On Aug. 24, 2011, an uncrewed Soyuz crashed during a planned cargo flight to the International Space Station. Later that year, on Dec. 23, a Soyuz-21.b failed in its mission to launch a Meridian-5 military communications satellite, due to a problem in the third stage.

On April 28, 2015, a Progress 59 supply ship to the ISS began spinning out of control shortly after its Soyuz-U launched it into orbit. The ship eventually burned up in Earth's atmosphere, cargo undelivered.

The most recent failure involving a Soyuz launch took place on Nov. 28, 2017, when nineteen satellites riding aboard a Soyuz rocket could not be reached. However, the fault lay more with the main satellite's programming than with the rocket. The following January, Russian Deputy Prime Minister Dmitry Rogozin told Russian state television that the satellite was programmed with co-ordinates from a launch from the Baikonur Cosmodrome in Kazakhstan, east of Russia. However, the satellite actually launched from a new launchpad called Vostochny, in eastern Russia.