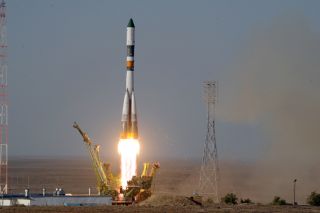 Russian space officials have found the cause for a rocket failure last week that crashed an unmanned supply ship bound for the International Space Station, according to Russian news reports.

The robotic Progress 44 cargo spacecraft crashed in Siberia on Aug. 24 after its Soyuz rocket failed shortly after liftoff. The craft and its 2.9 tons of supplies for the space station were lost.

Since the accident, officials have been investigating the source of the problem, a rarity among the famously reliable Soyuz series of vehicles. Engineers have now traced the source of the failure to a malfunction in the gas generator in the Soyuz’s third stage engine, Russian Federal Space Agency (Roscosmos) spokesman Alexei Kuznetsov told the Russian Itar-Tass New Agency on Monday (Aug. 29).

“Members of the emergency commission have determined the cause of the failure of the Soyuz carrier rocket’s third stage engine. It is a malfunction in the engine’s gas generator,” he said. [Photos: Russia's Lost Cargo Ship Progress 44]

Deducing the cause of the accident could help Russian officials move toward resolving the issue for future Soyuz flights, which are also used to transport cosmonauts and astronauts to the space station.

NASA has said no manned Soyuz rockets will lift off until the problem has been resolved, which means there is the potential chance the orbiting laboratory may have to be left without a crew temporarily.

To further the investigation into the accident, Russian officials have been trying to recover debris from the crash in the mountains of the Altai region of Siberia, where it fell. So far, only one Mi-8 helicopter belonging to the local Emergencies Ministry has been put to the task, but more will soon take up the search, according to Itar-Tass.

“The number of aircraft will be increased,” Alexander Puzanov, head of the Centre for Monitoring Carrier Rocket Debris Fallout Area in Siberia, told Itar-Tass. “This will allow us to enlarge the search area. We will use all aircraft available in the region.”