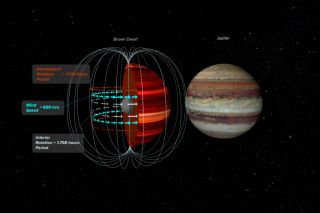 A brown dwarf, left, and Jupiter, right. The artist's conception of the brown dwarf illustrates the magnetic field and top of the atmosphere, which were observed at different wavelengths to determine wind speeds in a new study.
(Image: © Bill Saxton, NRAO/AUI/NSF)

For the first time ever, astronomers have measured wind speed on a brown dwarf, or "failed star," an object heftier than a planet but not massive enough to host the fusion reactions that power stars.

Related: Photos: most powerful storms of the solar system

The research team studied a brown dwarf called 2MASS J10475385+2124234, which is about 40 times more massive than Jupiter and lies 34 light-years from Earth. The scientists employed a novel strategy that was inspired by previous observations of Jupiter.

That's because the radio emissions are coming from electrons interacting with Jupiter's magnetic field, which is rooted deep in the planet's interior, she explained. The visible and infrared (IR) data, on the other hand, reveal what's happening in the gas giant's cloud tops.

The difference between the two rotation rates therefore provides a measurement of wind speed in Jupiter's upper atmosphere. And it should be possible to gather similar data for brown dwarfs, which are like scaled-up gas giants, the team reasoned.

"When we realized this, we were surprised that no one else had already done it," Allers said.

So Allers and her colleagues did it.

They gathered radio data on 2MASS J10475385+2124234 in 2018 using the Very Large Array telescope network in New Mexico. And they got the IR observations in 2017 and 2018 with NASA's Spitzer Space Telescope, which tracked the movement of a long-lived feature through the brown dwarf's upper atmosphere. (The researchers also studied a second brown dwarf, called WISE J112254.73+ 255021.5, but were unable to get the requisite IR information for that one.)

Such a disparity is to be expected. After all, the brown dwarf is significantly warmer, and thus more energetic, than Jupiter. 2MASS J10475385+2124234 has an estimated temperature of 1,124 degrees Fahrenheit (607 degrees Celsius), whereas Jupiter's cloud tops are a frosty minus 230 F (minus 145 C).

The new results should help astronomers learn more about the complex dynamics of brown dwarf atmospheres, which are poorly understood. After all, researchers now have an actual wind-speed number, rather than a mere estimate, to plug into their models.

"If you know how fast the wind speed is, you actually can get a pretty good handle on whether the atmosphere is dominated by banding or by circular storms," study co-author Johanna Vos, a postgraduate researcher at the American Museum of Natural History in New York, told Space.com.

And applications of the new study, which was published online today (April 9) in the journal Science, go beyond brown dwarf research, both Allers and Vos said.

"The next step is to do this for an exoplanet orbiting a star," Vos said. "It's kind of opened up new possibilities, and I find that really exciting."

But not every exoplanet is open to this line of inquiry, she added; astronomers will have to content themselves with relatively cool gas giants that can be directly imaged, at least for the foreseeable future. (The technique won't work with "hot Jupiters," gas giants that orbit very close to their stars, Vos said. These planets are tidally locked, always showing their host stars the same face, making it difficult if not impossible to track large-scale atmospheric movement.)

And such work cannot be done with Spitzer anymore, because NASA recently retired the workhorse space telescope. It will be tough for NASA's Hubble Space Telescope to pick up the slack, Vos said; Hubble orbits Earth and therefore doesn't make the required lengthy, uninterrupted observations of distant targets. (Spitzer circled the sun in an Earth-trailing orbit.)

"I think JWST will be our next opportunity to do this," Vos said, referring to NASA's $9.7 billion James Webb Space Telescope, which is scheduled to launch next year.

Many other researchers will be champing at the bit to use the powerful, flexible JWST once it comes online, so it may be tough to secure the requisite 20 or so consecutive hours on the scope, Vos said.