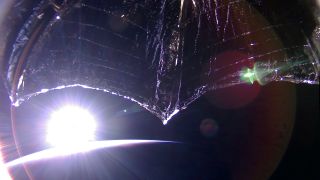 The Planetary Society's solar-sailing spacecraft owes a debt to visionaries across four centuries, said CEO Bill Nye as he celebrated LightSail 2 being named one of Time magazine's best inventions of the year.

Nye, who is best known for his Emmy-award-winning "Bill Nye the Science Guy" show on PBS in the 1990s, told delegates at SpaceCom in Houston last month that the spacecraft is performing well.

He lauded the team of engineers who launched and operated the Earth-orbiting spacecraft on a nonprofit budget. Their work, he added, also should include credit from the visionaries of solar sailing in the last few centuries, with names ranging from 17th-century astronomer Johannes Kepler to 20th-century astrophysicist (and Planetary Society co-founder) Carl Sagan.

"I was not alive in 1607, but Kepler was," Nye joked by way of introducing the famed astronomer. Kepler observed what today we call Halley's comet and also noticed that no matter which way the comet was moving in space, the gas and dust streamed away from the sun. Nobody knew why that was the case in the early 1600s, but today we've learned the comet's tail is pushed in that direction by the constant pressure of particles flowing out from the sun — the solar wind.

"There's something about sunlight that must carry force, the same way wind carries the force of sailboats at sea," Nye said. "[Kepler] predicted one day people would be sailing through space, carried by light. That was a tremendous idea, just based on inference and observation."

"How shiny and low mass was it?"

But most satellites and space missions even today carry fuels like hydrazine or liquid oxygen to space to use as propulsion. But propulsion requires mass; this increases the cost of launches. And engineers have no way of refueling satellites and spacecraft right now, so the satellites must operate with the fuel they carry until the mission is complete.

Solar sails instead use the pressure of the sun's solar wind for propulsion, but that approach presents other complexities. One challenge involves efficiently folding up a solar sail inside a rocket to make it into space safely. Another is constructing a sail that's light enough and yet tough enough to survive years of space radiation. Interstellar missions often cite solar sailing as a good option, because (according to the Planetary Society) spacecraft propelled by the constant acceleration from the sun could reach other stars faster than those using conventional fuels.

Among the early popularizers of solar sailing was Sagan, a Cornell University professor and host of the original "Cosmos" television show of the 1980s, who consulted on some NASA missions. In 1976, Sagan appeared on "The Tonight Show," then hosted by Johnny Carson, holding a model of a solar sail being developed by NASA's Jet Propulsion Laboratory in California. This was roughly four years before Sagan co-founded The Planetary Society, but even then he and many others were talking about solar sailing for future space missions, Nye said.

"This was a spacecraft so shiny and so low mass. How shiny and low mass was it?" Nye interjected, echoing a common question technique he used in his "The Science Guy" shows to frame science concepts for kids. "It was so shiny and low mass," he continued, "that sunlight gives it a push. The photons of light carry momentum."

The sail spacecraft shown on "The Tonight Show" would have boasted sides of roughly one kilometer (0.6 miles) each and was designed to see Halley's comet fly by Earth in 1986. That mission never happened (in part due to technical difficulties and challenges in getting funding, Nye said), but the idea of solar sailing persisted nonetheless.

A few solar-sail missions (and some less successful attempts) have unfolded in more recent years. The Planetary Society launched a solar-sail concept called Cosmos 1 in 2005, but the satellite never made it to orbit due to a Russian rocket failure. In 2008, a failed SpaceX Falcon 1 launch destroyed a cubesat-based solar sail aboard NASA's NanoSail-D mission.

The Japan Aerospace Exploration Agency (JAXA) subsequently made history by demonstrating solar sailing in interplanetary space in 2010 on its Ikaros spacecraft. NASA followed up with a successful NanoSail-D2 project in 2011, and the Planetary Society got its own first shot at solar sailing with LightSail 1 in 2015 — which, despite some technical issues, did deploy its sail and send pictures from Earth orbit. And there have been other solar sails launched since then, such as the University of Illinois' CubeSail in 2018, not to mention others in the works at NASA, the European Space Agency and other organizations.

But Nye spent most of his time talking about LightSail 2, showing video and pictures the spacecraft has sent from its Earth-orbiting perch — where the spacecraft remains nearly half a year after launching in June 2019. The spacecraft is not in continuous communication with Earth because it is operating on a nonprofit budget, but it relays information to a few communications stations often enough for controllers to keep an eye on it and send commands as needed.

Nye added that solar sails could power spacecraft tasked with many applications for Earth, including planetary defense from asteroids, another issue Nye regularly speaks about. For example, he suggested, a solar-sailing spacecraft in orbit between the sun and Earth could perpetually face away from the sun and look for asteroids approaching our planet that might be on a possible collision course.

"Looking for asteroids is like looking for charcoal briquettes in the dark, which is hard at visual wavelengths, but with the right instrument you can see them," Nye said. That "right instrument" would use infrared light, which allows scientists to see the heat signature of an incoming space rock.

Nye said LightSail 2 has really inspired him, and he joked that others must be catching on, since the mission was the subject of a recent "Jeopardy!" question. He added, however, that solar sailing will have applications for humanity in the decades to come, and urged space entities around the world to do more research to develop better sails for future missions.