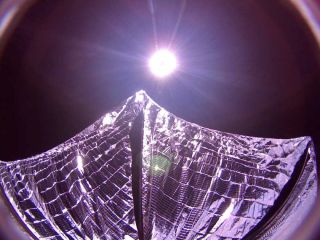 The Planetary Society's tiny LightSail spacecraft has sent a photo of its deployed solar sail down to Earth, confirming that the cubesat's shakeout flight has been a complete success.

The outlook wasn't always sunny for LightSail solar sail. The cubesat — whose mission is funded by members and supporters of The Planetary Society, a California-based nonprofit — overcame two troubling orbital incidents before unfurling its sail on Sunday (June 7).

"I'm very proud to say that our LightSail test mission was a success," Planetary Society CEO and former TV "Science Guy" Bill Nye said in a statement today (June 10). "We saw again that space is hard. It's a test flight, and sure enough, our little spacecraft tested us." [Evolution of Solar Sails for Space Travel (Photos)]

LightSail launched to low Earth orbit May 20 aboard the same rocket that lofted the U.S. Air Force's robotic X-37B space plane on its fourth mystery mission. The cubesat was tasked with proving the viability of some key components of solar-sailing technology, which allows spacecraft to harness the momentum imparted by photons streaming from the sun.

"Solar sailing is worth doing, because it has the potential to democratize space," Nye said during a news conference today.

"It will allow small organizations — or organizations that don't want to allocate too much money to a space mission — to build a small solar sail, deploy it the way we deployed ours and go to almost any destination in the solar system," Nye added. "If you have time, you can get there, because you never run out of fuel. The sun shines all the time."

On this first flight, mission managers wanted to see how LightSail's core systems work — especially the gear designed to deploy its 344-square-foot (32 square meters) solar sail. The overall goal was to pave the way for a true orbital solar-sailing trial by another LightSail cubesat, which is due to launch next year.

But LightSail went dark on May 22, felled by a software glitch. The spacecraft didn't communicate with Earth again until a week later, when it was apparently rebooted after a fast-moving charged particle struck its electronics board.

The drama wasn't over, however. LightSail went silent again on June 3, shortly after deploying its solar panels. This maneuver resulted in a voltage bump that caused the spacecraft's batteries to go offline, mission team members said.

"It took about two or three days for the battery system to juggle the new power levels and go through all the eclipses and sunlight periods and eventually stabilize," said Rex Ridenoure, CEO and president of California-based Ecliptic Enterprises Corp., LightSail's integrating contractor for testing and flight readiness.

"Eventually, they did stabilize, and everything was working great," Ridenoure said of the batteries. "All that perturbation really caused some concern, but it really wasn't an anomaly; it was as designed, and it looks like it's working well now."

LightSail bounced back Friday (June 5), and the spacecraft's handlers soon commanded it to unfurl its sail. The first few attempts failed, but LightSail finally complied on Sunday. Then, on Tuesday (June 9), mission team members received the final pieces of an image taken by LightSail that confirmed the successful sail deployment.

"That was quite a thrill," said LightSail project manager Doug Stetson. "This has really been a roller-coaster ride of emotions — a lot of sleepless nights for the operations and engineering team."

LightSail's days in space are numbered; it launched to a relatively low orbit, and atmospheric drag is already pulling the cubesat down. The spacecraft will probably burn up in Earth's atmosphere on Saturday or Sunday (June 13 or June 14), Stetson said.

Skywatchers may be able to catch a glimpse of LightSail before this happens; The Planetary Society provides viewing tips here.

LightSail is not the first craft to deploy a solar sail away from Earth; Japan's Ikaros probe unfurled a much larger sail in deep space in 2010, and NASA's NanoSail-D cubesat deployed one in Earth orbit in January 2011. Such missions are helping lay the foundation for greater leaps to come, Nye said.

"Right now, there really isn't much of a limit on what you can do in the solar system" with solar sails, he said. "This LightSail test flight is the first small step on that long journey."