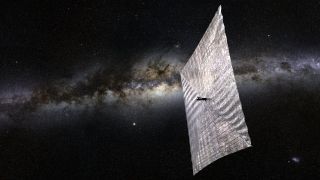 It wasn't exactly smooth sailing, but The Planetary Society's cubesat got the job done in the end.

"Sail deployment began at 3:47 p.m. EDT (19:47 UTC) off the coast of Baja California, Mexico, as the spacecraft traveled northwest to southeast," The Planetary Society's Jason Davis wrote in a mission update Sunday. [Evolution of Solar Sails for Space Travel (Photos)]

"Power levels were consistent with ground-based deployment tests, and the spacecraft’s cameras were on," Davis added, quoting the following email update from LightSail mission manager David Spencer: "All indications are that the solar sail deployment was proceeding nominally."

The team hopes to get an image from LightSail down on the ground soon, Davis said.

LightSail launched May 20 on a mission to prove out some key components of solar-sailing technology — for example, attitude-control and sail-deployment systems — ahead of a more involved sailing trial in Earth orbit next year with a different LightSail craft.

The first flight has been a stressful and eventful one for the LightSail team. The spacecraft stopped communicating with Earth after just two days in orbit, silenced by a software glitch. But LightSail rebooted a week later, apparently recovering after a fast-moving charged particle slammed into its electronics board.

The original plan, incidentally, called for putting LightSail through a 28-day orbital checkout period before attempting sail deployment. But after the spacecraft began experiencing problems, team members decided to deploy as soon as they could confidently do so.

LightSail should now be visible from the ground, provided viewing conditions are good. To learn how to spot the cubesat, read Davis' latest mission update here: http://www.planetary.org/blogs/jason-davis/2015/20150607-lightsail-deployment-initiatied.html

You'll have to act relatively fast, because LightSail's days in orbit are now numbered. The cubesat launched to a relatively low orbit, and atmospheric drag will likely pull it back down to Earth in the next two to 10 days, Planetary Society representatives have said.