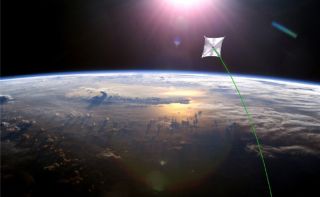 Like mariners of ancient days, cosmic adventurers might one day harness the power of sails to journey through the stars. But rather than the ocean's wind, future space travelers would use sunlight to drive a technology known as a solar sail.

How do solar sails work?

Solar sails are a spacecraft propulsion method utilizing a curious quirk of photons. These particles of light have no mass and yet when they impinge on something, they can impart momentum and provide a tiny push. You get shoved by photons every time you step out into the sunshine but their incredibly small force is essentially unnoticeable to your body.

In space, things take a different turn. The laws of physics state that every action must have an equal and opposite reaction, so, when photons from the sun bounce off a spaceship, the ship is propelled ever so slightly in a direction away from the sun. With a single photon the change is negligible but a large collection of them can provide significant thrust.

Place a large, flat, mirror-like sheet in front of a spacecraft and the sun's power will push it forward. The material must also be strong and gossamer-thin in order to catch and control the sunlight. Solar sails can tack like regular sails to travel in many directions, according to the Planetary Society. The technology has an advantage over other propulsion methods because a ship does not need to carry fuel wherever it goes, instead relying on the freely-available light of stars.

Since they get a continuous push from the sun, solar-sail-powered ships can constantly accelerate as they journey to the edge of the solar system, achieving super-fast speeds that would be much more difficult for chemical rockets. Alternatively, solar sails can also be driven by gargantuan laser beams.

NASA tested the concept of solar sailing in 1974 with its Mariner 10 spacecraft, which was designed to fly past Venus and Mercury. When the probe ran out of fuel, mission control turned its solar panels to just the right angle to catch the sun's rays and push the spacecraft forward.

The first human-made solar sail to successfully fly was the Japanese Space Exploration Agency's Interplanetary Kite-craft Accelerated by Radiation Of the Sun (IKAROS) spacecraft. The robot deployed its 46-foot-wide (14 meters) sail in June 2010 and proved the ability to control its direction and change orientation on command.

That same year, NASA launched the tiny NanoSail-D demonstrator mission, which had a diamond-shaped sail 10 feet (3 m) to a side. The probe unfurled its solar sail in 2011 and circled the Earth for eight months before burning up in the atmosphere. Lightweight and with little room to carry fuel, small satellites are thought to be ideal candidates for this type of propulsion.

In 2015, the Planetary Society launched the LightSail-1 spacecraft into orbit, which sported a 344-square-foot (32-square-m) solar sail, about the size of a boxing ring. Despite some successes, and a selfie or two, the mission suffered from technical glitches and eventually stopped transmitting signals before entering the atmosphere a few weeks after it was launched.

But the Planetary Society is back at it and has high hopes for their new LightSail-2 mission. Launching at the end of June 2019, the craft is about the size of a bread loaf and intends to release a similarly-sized sail as its predecessor. Mission planners said that one day solar-sail-driven ships could travel to the edge of the solar system or beyond.

The Breakthrough Starshot Initiative intends to do just that, sending lightweight microchip-sized probes to explore the nearest star system, Alpha Centauri, which is 4.3 light-years away. Announced in 2016, the $100-million venture is investigating the feasibility of using a colossal Earth-based laser to accelerate the chips to 20% the speed of light and reaching Alpha Centauri in only 20 years.