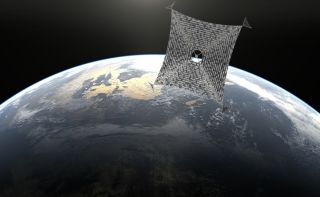 A new method of space travel is about to get its moment in the sun.

Several upcoming missions aim to harness the subtle push of sunlight, using gossamer "solar sails" to cruise through the heavens like boats through the sea. Such propellant-free propulsion could take craft cheaply and efficiently to a variety of destinations, from locations in near-Earth space to the edge of the solar system and beyond, advocates say.

A spacecraft equipped with a sail 1,300 feet (400 meters) wide, for example, could travel 1.3 billion miles (2.1 billion kilometers) per year, allowing it to escape the sun's sphere of influence in just a decade or so, according to researchers behind the Interstellar Probe, a NASA concept mission proposed about 15 years ago. [Photos: Solar Sail Evolution for Space Travel]

"There's nothing known to us now that could actually attain that kind of a speed using chemical propulsion," aerospace engineer Bruce Campbell said last week during a presentation with NASA's Future In-Space Operations (FISO) working group.

Solar radiation pressure provides a very small push to a spacecraft. But this push is continuous and can thus accelerate a probe to tremendous speeds over time.

Harnessing sunlight in this way is not a new idea. Jules Verne mentioned the possibility in his 1865 book "From the Earth to the Moon," and Arthur C. Clarke wrote about a solar-sailing spaceship race a century later, in the 1964 short story "Sunjammer."

But it took a long time for solar sails to go from concept to reality. The first successful demonstration of the propulsion system didn't come until 2010, when Japan's Ikaros probe deployed its 46-foot-wide (14 m) sail and became the first craft ever to cruise through space on the backs of photons.

NASA followed suit five months later, launching the tiny NanoSail-D demonstrator to Earth orbit in November 2010. NanoSail-D unfurled its sail in January 2011, then circled the planet for eight months before burning up in the atmosphere.

Other projects now loom on the horizon, building momentum for the technology. A big milestone should come in early 2016, when NASA plans to launch the largest-ever solar sail to space.

The $27 million Sunjammer mission, which takes its name from the Arthur C. Clarke story, will use a sail built by California-based company L'Garde that measures 124 feet (38 m) on a side. The sail, made of an advanced material called Kapton, is just 5 microns (about 0.0002 inches) thick. It weighs less than 70 pounds (32 kilograms) and packs down to the size of a dishwasher, NASA officials have said.

The current plan calls for outfitting Sunjammer with some sun-monitoring instruments and sending it out to a spot about 1.8 million miles (3 million km) from Earth, along the Earth-sun line. That's twice as far away as the Earth-sun Lagrange Point 1 (L1), a gravitationally stable spot in space that has hosted various heliophysics and space-weather missions over the years. [Photos: Meet Sunjammer, World's Largest Solar Sail]

"What we intend to do with Sunjammer is demonstrate that a solar sail is an opportune device to place solar-warning instruments closer toward the sun than is currently allowed with just conventional systems at L1," L'Garde president Nathan Barnes said during a FISO talk in February.

Spacecraft positioned at L1 help researchers and the world prepare for space weather events, detecting huge clouds of super-hot solar plasma known as coronal mass ejections (CMEs) about 40 minutes before they may hit Earth (where they can disrupt power grids, GPS signals and radio communications).

So a probe twice as far away would provide warnings twice as early, Barnes said.

"This advancement would bring a number of folks a large level of security and comfort," he said.

Sunjammer isn't the only solar-sail mission in the works. The nonprofit Planetary Society, for example, is working on a project called LightSail-1, which will launch a roughly 10-pound (4.5 kg) spacecraft to Earth orbit.

The goal is to demonstrate navigational control and use sunlight pressure to increase the craft's speed, further proving out solar-sail technology, Planetary Society representatives said.

NASA researchers are also developing a mission concept called Lunar Flashlight, which would send a tiny, sail-equipped "CubeSat" to the moon. The sail would not just provide propulsion; it would act as a mirror for Lunar Flashlight as well, reflecting sunlight down into shaded lunar craters so that onboard sensors could search these features for water and other volatile compounds.

Sails could also help alleviate the world's growing space-junk problem, by allowing defunct or dead satellites to de-orbit safely. The European Space Agency, in fact, hopes to conduct an in-space test of a de-orbit sail called "Gossamer" by the end of 2014.

And some researchers have even higher hopes for solar sails, suggesting that a truly enormous sail —one the size of Texas, for example — could send a spaceship to another star system in just a few centuries. (A space-based laser would have to shine a powerful beam on the sail as the craft moved farther and farther away from the sun, however.)

While meteoroids will pierce solar sails from time to time, such impacts should degrade the sails' performance only very slowly, Barnes said. So the technology may end up changing the way engineers plan and design space missions.

"If solar sails get up and off the floor and start running, it will really come down to a new paradigm shift in spacecraft design," Barnes said. "Instead of designing a spacecraft around 50 [kilograms] of hydrazine [110 pounds] that you have in your tank, you will now have to design that spacecraft and all of the components and all of the systems around a lifetime of propulsion."