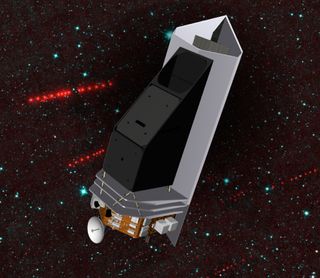 Earth will soon lose a key tool in the fight to spot potentially hazardous asteroids — and NASA has decided to fund a custom-built replacement.
(Image: © NASA/JPL-Caltech)

Earth will soon lose a key tool in the fight to spot potentially hazardous asteroids — and NASA has decided to fund a custom-built replacement.

NASA wants to build a space telescope to survey the sky in infrared light, a much-needed boost in its program to identify and track asteroids in Earth's immediate neighborhood. These activities are the cornerstone of planetary defense, and NASA's Science Mission Directorate has created a separate bucket in the budget, worth $150 million in the current fiscal year, for planetary defense, the agency announced today (Sept. 23).

That budget line is intended to increase flexibility and responsiveness in planetary defense, Thomas Zurbuchen, associate administrator for the Science Mission Directorate, said during a meeting of the Planetary Science Advisory Committee held in D.C. today. "The goal is not to do everything for eternity," he said. "The goal is to do the right things as they pop up."

For now, the right thing, Zurbuchen said, is to build a new space telescope capable of detecting and tracking near-Earth objects: NASA's Jet Propulsion Laboratory will lead the project. Zurbuchen said the new instrument could launch as early as 2025, although he emphasized that is not an official target date, which will depend on how much funding the program receives.

The new initiative is heavily based on a project called NEOCam, a mission concept that the planetary-defense community has been discussing for years. NEOCam was formally proposed as a science mission, but not selected for funding, in a decision that Zurbuchen today called "one of the biggest screwups I've made in my job."

When the NEOCam proposal was first discussed, it was considered under the framework of science, not planetary defense. And while both sides of the divide are interested in asteroids, they need different types of information. Scientists want a statistical sample: They don't need to see every single asteroid, they just want to get a good sense of what asteroids are like overall.

Planetary defense is very different: These experts need to see every object perceivable and understand precisely where it is and where it's going. Ideally, the scientists would also know what each object is like in size and structure, since, if an asteroid is indeed a threat, those factors shape what an impact would look like.

Zurbuchen said today that the new budgetary system addresses that distinction by taking planetary defense out of competition with science. He also confirmed that the new NASA telescope would be closely modeled on the NEOCam project.

Related: This Scientist Is Creating Fictional Asteroids to Save Humanity from Armageddon

NEOCam itself had roots in the NEOWISE project, which is the second life of a former astrophysics mission called the Wide-field Infrared Survey Explorer. The telescope turned its focus to asteroids in 2013 under the new moniker NEOWISE, and since then, the telescope has spotted tens of thousands of the space rocks, 135 of which travel in Earth's immediate neighborhood.

But NEOWISE's success at its second career was due to luck, not design, and the luck is running out. "It turned out to be pretty good at picking up asteroids," Amy Mainzer, who was principal investigator for NEOWISE at NASA's Jet Propulsion Laboratory in California at the time, said during a media briefing in March at the Lunar and Planetary Science Conference in The Woodlands, Texas. "Because it was never designed for that purpose, it is near the end of its life."

Zurbuchen said today that the NEOWISE mission is expected to end around mid-2020, although he emphasized that timeline is an estimate, and the instrument's tenure could last longer.

Mainzer and her colleagues have spent eight years thinking through how to take what worked for NEOWISE and tailor a successor mission devoted exclusively to spotting asteroids. That means continuing to view the skies through thermal infrared, which is the heat that asteroids, fueled by the sun's radiation, emit. Such a technique allows scientists to spot reflective and dark asteroids alike, an improvement on approaches that rely on visible light and therefore struggle to spot dark asteroids.

"There's a famous saying — 'Why do we rob banks? Well, that's where the money is,'" Mainzer said in March. "In this case, we look for asteroids in these wavelengths because this is where the energy is."

Related: Even If We Can Stop a Dangerous Asteroid, Being Human May Mean We Don't

But there are some key changes to the NEOCam design. It benefits from years of camera and electronic development, and can scan through the sky much faster than NEOWISE could.

Most importantly, the device will be stationed at "parking spot," balanced between the pull of the Earth and that of the sun. That location is a much colder venue than NEOWISE's outpost, which means NEOCam doesn't need to carry cryogenic fluid. (When NEOWISE ran through its coolant, the instrument lost the ability to measure a couple of key wavelengths.)

"It'll just sit there in the cold darkness of space," Mainzer said of NEOCam. That project's primary mission was designed to last for five years, the team thinks it could plausibly stretch to twice that time. It's unclear from Zurbuchen's comments today precisely how closely the new NASA mission will follow the specifications sketched out by the NEOCam team.

Zurbuchen did confirm that the new project's primary mission would last for five years, which could be extended to 10. That long life span is vital: In 1998, Congress tasked NASA with identifying 90% of near-Earth asteroids measuring at least 469 feet (140 meters) across by 2020, but the government didn't offer much money to help meet that goal. Given current estimates of the number of asteroids around Earth, scientists believe that they have spotted about 30% of the objects in this size range.

The newly announced instrument will boost that number dramatically, particularly in the early days of the mission, as the telescope flexes its improved muscle. Within five years of work, the instrument will be able to find 65% of those undiscovered objects, Zurbuchen said, and it should be able to spot 90% of them within 10 years if the mission is extended.

Those detections would be a crucial addition to planetary defense efforts, which Zurbuchen noted that both he and NASA administrator Jim Bridenstine deem important intersections of science and societal value. "It's a topic where space reminds us from time to time that, yes, on a historic timescale, a geologic timescale for sure, planetary defense is something that we have to deal with on a regular basis," Zurbuchen said.

The new budget format and NASA's decision to move ahead with a new space telescope to support planetary defense came as welcome news to scientists who have focused on the issue. "NASA's commitment to a space-based asteroid survey is a huge step forward for anyone who cares about human destiny," Richard Binzel, a planetary scientist at MIT, told Space.com in an email. "We are finally going to rely on knowledge, rather than luck, as our plan for dealing with hazardous asteroids."

NASA personnel at the meeting today confirmed that the prioritization is a move they've been wanting to make for a while. "I think this is a big step, it's something that we've wanted to do for quite a while," said Lori Glaze, director for the planetary science division of the Science Mission Directorate. "It looks like we're finally in a place to say we're ready to move forward."

Zurbuchen reiterated that sentiment. "The initiative that I spent most of my bullets on was this one," he said.

And he's excited to finally get the project started. "Let's go fly this mission," Zurbuchen said.