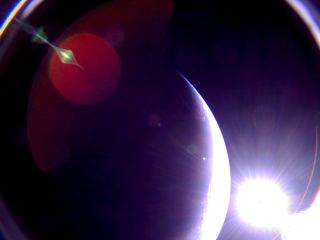 The Planetary Society’s LightSail 2 captured this picture of Earth’s limb on July 6, 2019, at 12:41 a.m. EDT from a camera mounted on its dual-sided solar panels. The spacecraft was headed into orbital sunset at the time, and the sun is visible to the right. The photo is unmodified and shows a number of lens flare artifacts caused by sunlight scattering around the camera optics. LightSail 2’s dual fisheye cameras have fields of view of about 180 degrees, causing the arcs in the corners and some distortion.
(Image: © The Planetary Society)

The Planetary Society's solar-sailing spacecraft LightSail 2 beamed back its first views of Earth on Sunday (July 7).

The images feature Earth's silhouette as the spacecraft floats into an orbital sunset. Sunlight scattering around the onboard cameras creates epic lens flares that would make the likes of action directors J.J. Abrams and Michael Bay proud.

The Planetary Society, a nonprofit organization led by science popularizer Bill Nye that advocates for space exploration, also released a few shots from inside the spacecraft, giving us a snapshot of LightSail 2's interior prior to solar-panel deployment. The spacecraft is outfitted with two onboard fisheye cameras, each with a field of view of about 180 degrees. As a result, the photos are a bit distorted.

LightSail 2 launched aboard a SpaceX Falcon Heavy rocket on June 25. On Tuesday (July 2), the spacecraft phoned home and began a series of checkouts to show that the craft's systems were operating as expected. Now that LightSail 2 is gearing up to start its mission, The Planetary Society has created an online tool so that anyone, anywhere, can track the spacecraft live.

The new dashboard (and accompanying website) will continuously display the status of the crowdfunded satellite as it orbits the planet, providing people around the world with a fun glimpse into spacecraft operations.

Officially dubbed LightSail 2 Mission Control, the dashboard will be updated each time the satellite communicates with the ground. This dashboard features a wealth of data, including where the satellite is, how long it has been in orbit, its battery level, how fast it's rotating and the status of its solar sail.

(Visitors can also download all the latest data, along with a full breakdown of what it all means, here.)

Roughly the size of a loaf of bread, the 11-lb. (5 kilograms) cubesat aims to test how well a solar sail can function in Earth orbit, propelled by nothing more than photons, or particles of light, released by the sun.

LightSail 2's predecessor, LightSail, was a similar spacecraft, whose goal was to prove that a sail could unfurl in space. Despite some initial setbacks, the original LightSail's 2015 mission was an overall success, with the craft beaming back the ultimate selfie: a gorgeous picture of the silvery sail unfurled.

LightSail 2 is a more ambitious follow-on, doing much more than simply unfurling its sails. The tiny craft will actually try to maneuver through space, boosting itself into different orbits using the power of sunlight.

Both LightSail spacecraft are completely citizen-funded, with more than 40,000 people supporting the mission (and the development of solar sailing), donating everything from $5 to more than $1 million. The project's new mission-control website will let those people, and many others around the world, take part in the project.

The next step for LightSail 2 will be to unfurl its solar sail. The highly anticipated event could happen as soon as Tuesday (July 9). Once deployed, the ultrathin Mylar sails should expand to roughly the size of a boxing ring.

The reflective nature of the sail means the satellite could be visible to people on the ground, especially if the craft is passing overhead at dusk or dawn. For the best chance of spotting LightSail 2, be sure to check the mission control page for updates about when the sail is officially unfurled and when it will pass over your area.