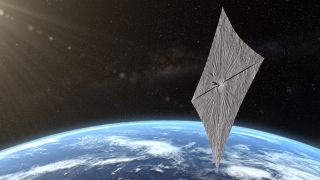 The space advocacy organization The Planetary Society recently confirmed that its LightSail 2 spacecraft has sent its first signals home from space.

The roughly 11-lb. (5 kilograms) cubesat is designed to prove that solar sailing is a feasible way of keeping satellites moving. Fuel is a costly and heavy commodity, and if LightSail 2 can prove that the solar-powered technique works well, perhaps future missions into the deep reaches of the solar system and beyond can be propelled by photons, or particles of light released by the sun.

The project launched into space last week (June 25) from the Kennedy Space Center in Florida aboard a SpaceX Falcon Heavy megarocket. On Tuesday (July 2), the bread-loaf-size LightSail 2 experiment left Prox-1, its carrier vehicle. LightSail 2 will ultimately open up its ultrathin four-panel sail to achieve a surface area about the size of a boxing ring.

Related: What to Expect When LightSail 2 Launches into Space

But before that can happen, the Planetary Society team needed confirmation that the spacecraft itself was healthy. That message came on July 2, as the spacecraft was passing over the satellite's mission control at California Polytechnic State University in San Luis Obispo. The signals came from LightSail 2's recently deployed radio antenna, which began transmitting status data and a call sign in the form of morse code, according to LightSail 2 officials.

"We're all very happy — after years of preparation, we are flying an operational spacecraft!" Bruce Betts, LightSail program manager and Planetary Society chief scientist, said in a statement.

More data from LightSail 2 will be retrieved tonight (July 3) when it flies over Georgia Tech, where students built Prox-1.

Once the cubesat deploys its solar sail early next week, the rays from the sun will give LightSail 2 a gentle push. The goal is to observe LightSail 2 over the course of a month to see if it shifts in its orbit by a measurable amount, according to The Planetary Society officials. That will help demonstrate that solar sailing is an effective satellite-propulsion technique.

LightSail 2 isn't the first craft to do such work. For example, Japan's IKAROS probe demonstrated solar sailing in interplanetary space in 2010.