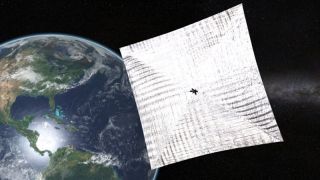 This article was co-published on The Planetary Society’s website. For more information about LightSail 2, please visit sail.planetary.org.

The Planetary Society's LightSail 2 spacecraft is finally ready to attempt flight by light.

The crowdfunded, loaf-of-bread-sized CubeSat is set to blast off from Kennedy Space Center on June 24 aboard a SpaceX Falcon Heavy rocket. Liftoff is set for 11:30 p.m EDT (0330 June 25 GMT), the start of a 4-hour launch window.

Roughly 2 weeks after launch, the spacecraft will deploy its 344-square-foot (32-square-meter solar sail) — about the size of a boxing ring — and use the slight pressure from solar photons to gradually raise its orbit. If successful, LightSail 2 will become the first spacecraft in Earth orbit to fly on sunlight alone, demonstrating that solar sailing is a viable method of propulsion for CubeSats. It will also mark the culmination of a 10-year project with a legacy deeply intertwined with Planetary Society history.

LightSail is hitching a ride to orbit aboard the U.S. Air Force's Space Test Program 2 (STP-2) mission, which will send a total of 24 spacecraft into 3 different orbits. To do this, the Falcon Heavy's upper stage will have to complete long coast periods and 4 upper stage burns. The complexity of the flight plan has prompted SpaceX to call it "among the most challenging launches in SpaceX history."

The Falcon Heavy's center core has not flown before, but the side boosters are being reused from the Arabsat 6A flight in April. This will be the first time the Department of Defense has used a rocket with "flight-proven" boosters, giving government officials a chance to check out SpaceX's refurbishment procedures for future missions. After liftoff, the plan is for the side boosters to once again fly back to Florida and land upright, while the center core touches down on the autonomous drone ship Of Course I Still Love You in the Atlantic Ocean. The recovery of the boosters, while one of the most exciting parts of any SpaceX mission, is not a requirement for launch success.

At launch, LightSail 2 will be tucked inside Prox-1, a suitcase-sized spacecraft designed by students at Georgia Tech. Prox-1 was originally designed to chase down and rendezvous with LightSail 2, but its mission is now focused solely on deploying LightSail 2 into orbit.

The Falcon Heavy upper stage’s first goal is an orbit with an apogee, or high point, of 865 kilometers above Earth’s surface, and a perigee, or low point, of 300 kilometers. There, it will deploy roughly a dozen CubeSats and a small satellite named Oculus-ASR.

The second satellite dropoff point is a circular, 720-kilometer-high orbit. Prox-1, carrying LightSail 2, will be first off the rocket here, about 1 hour and 20 minutes after launch. More small satellites from the Naval Postgraduate School and NASA will follow, as well as NOAA's 6-satellite COSMIC-2 payload developed in partnership with Taiwan. COSMIC-2 will receive radio signals from transmitters on Earth to measure the temperature and pressure of Earth's atmosphere from top to bottom.

The rocket's final stop will be an orbit 6,000 by 12,000 kilometers high. There, it will deploy a space weather experiment, sponsored by the U.S. Air Force, called DSX.

Prox-1 will spend its first week circling Earth quietly, allowing time for the other spacecraft launched to the same orbit to drift away so that each can be identified individually. Precisely 7 days after its release from the Falcon Heavy, the front door of Prox-1's CubeSat dispenser, called a P-POD, will swing open and allow a large spring to nudge LightSail 2 out into space.

Following its release, LightSail 2 will boot up, deploy its antenna, and begin sending out health and status information beacons. Our primary ground station and mission control center will once again be Cal Poly San Luis Obispo in California. Supporting Cal Poly are tracking stations at Georgia Tech, Purdue University, and Kauai Community College in Hawaii. The tracking stations will all forward LightSail 2 telemetry back to Cal Poly.

But not for long. About 5 days after launch—the exact timing depends on the frequency of ground station passes—a small coil of wire heats up and severs the spectraline, and the panels swing outward. This reveals the four storage compartments that hold the spacecraft's triangular solar sail sections.

Roughly a day after the solar panels are deployed, and about 2 weeks in total after launch day, the LightSail 2 team will command the spacecraft's solar sail to deploy. They will wait for a particularly good communications window, where the spacecraft is scheduled to pass over multiple ground stations on the same orbit. Four cobalt-alloy booms will unwind like carpenters’ metal tape measures from a rotating central spindle, pulling out the tips of the 4 sail sections as they extend. The deployment sequence will take about 3 minutes.

The first sign that things are going well will be increasing motor rotation counts seen in spacecraft telemetry. LightSail 2 will also be snapping pictures as the sails deploy. Image thumbnails will be downloaded on a subsequent communications pass, and the team will select one or more high-resolution pictures for download

After the sails are out, LightSail will use its momentum wheel to adjust the sail orientation, tacking like a sailboat as it flies into and away from the current of photons streaming from the Sun. When flying towards the Sun, the sail orients itself edge-on, effectively turning off its thrust. When flying away from the Sun, the sail turns broadside to the photons, getting a slight push. And we do mean slight: as large as the sails are, the photon-pressure push is only about as strong as the weight of a paperclip in the palm of your hand.

As slight as it is, that push is continuous for half of each trip around the Earth, and over time, it will raise LightSail 2's orbit. Technically speaking, the team is looking for an increase in the orbit's semi-major axis. To measure LightSail’s subtle altitude change precisely, the team has teamed up with the International Laser Ranging Service (ILRS). The ILRS will use its worldwide network of ground-based lasers to zap a small cluster of mirrors on the bottom of the spacecraft and measure the reflection time. This will tell us if the orbit is being raised as planned.

The orbit-raising phase of the mission will last about a month. LightSail 2 does not have the precision to maintain a circular orbit, so as its apogee rises, its perigee will decrease. Eventually, atmospheric drag will overcome the thrust from solar sailing, ending the primary mission. The spacecraft will continue to orbit Earth for about a year before succumbing to atmospheric reentry.

LightSail 2 may be visible to the naked eye after solar sail deployment. Once the sails are out, we will post a dashboard at sail.planetary.org offering pass predictions for your location.

To learn more about The Planetary Society and become a member, please visit us at planetary.org.

This story was provided to Space.com by The Planetary Society.