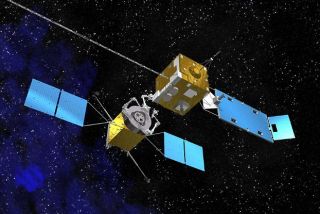 Robotically refueling and maintaining satellites in Earth orbit will allow government agencies and private companies to dramatically extend the lifetime of these valuable communications and scientific assets, advocates say.

When a satellite launches into geosynchronous Earth orbit these days, propellant makes up about half its mass. Lofting a satellite with only a portion of the fuel it would need to complete its mission, with the ability to inject more propellant in the future, would scale costs down considerably and enable more instruments to be packed aboard.

On-orbit servicing "opens up a whole host of possibilities of the more effective use of launching hardware into orbit," Reed added.

The SSCO already has several notches under its belt when it comes to testing mechanical capabilities for the task, with more trials planned on the ground and on the International Space Station (ISS) near the end of 2014.

Aboard the space station

In January 2013, the Robotic Refueling Mission (RRM) performed its first test on board the ISS, demonstrating that remotely controlled robots could work through valves and wires to successfully transfer fuel in space. Rather than using oxidizer or propellant such as hydrazine, the trial run pumped ethanol from the mock servicer to a mock satellite.

"Ethanol has a very similar viscosity, density, and heat capacity to hydrazine, but it doesn't have the explosiveness," Reed said.

This made it a good stand-in on the space station, where safety is a priority.

In the late summer or early fall of 2014, the SSCO intends to conduct further tests aboard the orbiting lab, focusing on making and breaking connections required for cryogenic rather than storable fuel.

The majority of the more than 400 operational satellites currently circling the planet are in low-Earth orbit. Earth's atmosphere constantly tugs at them, requiring minor reboosting that is powered by storable fuels.

Satellites in geosynchronous orbit, however, travel farther out, and are constantly tugged at not only by Earth's gravity but also by the gravity of the sun and the moon. Constantly drifting, these satellites rely on cryogenic fuel to stay on course.

As their name implies, storable fuels can be stored and transferred at room temperature. Cryogenic propellant requires colder temperatures; in low-Earth orbit, the fuel will boil off, creating bubbles in the tanks. Engineers have developed a new set of technologies to transfer the cryogenic liquid bubble-free into the new tank, some of which will be demonstrated during RRM's second phase.

On board the ISS, RRM tests the mechanics and capabilities of robotics to work in space, but relies on a stand-in fuel. On the ground, engineers have more flexibility with implementing safety measures.

In February 2014, the SSCO announced the successful test of its Remote Robotic Oxidizer Transfer Test (RROxiTT), which involved remotely transferring toxic oxidizer fuel under the high pressures that would be experienced in space, an experiment that would be far too hazardous to perform aboard the ISS.

"It's one thing when we fill up our cars at the local gas station," Reed said.

In this everyday situation, the gas sits at the bottom of the car's fuel tank, where it experiences no change in pressure when the fuel cap is opened. Not so in space, where the propellant sits at a pressure of approximately 250 to 300 pounds per square inch (psi), six times that experienced by RRM on the ISS. [6 Everyday Things That Happen Strangely in Space]

"In a satellite, you open the valve and fuel would come spewing out at 300 psi," Reed said. "It adds an additional complexity."

The next step for RROxiTT will involve a multi-story unit of a mock-up satellite suspended in a clean room at Goddard. The robot will attempt to fuel the satellite under pressure. Such a mockup will serve not only to test the feasibility of robotic refueling today, but will also assist engineers when it comes to training and development in the future, once such missions have been launched.

Stand-ins have been very helpful in the past. Reed pointed to NASA's Hubble Space Telescope, for which the SSCO built the servicing instruments and tools.

Astronauts used an on-the-ground model for training prior to visiting the instrument (which they did on five separate space shuttle missions), but engineers also relied on the hardware for evaluation and measurements, and to do real-time troubleshooting during servicing missions. [Hubble Space Telescope's Latest Cosmic Views]

Another example occurred with the RRM. The team utilized "Rosie," a high-fidelity mockup of the hardware on the space station. While the stand-in was used for occasional troubleshooting, engineers primarily relied on it to get a sneak peek at the activities about to be performed — to determine if tools would fit, for example, or if the camera would have a good view from a specific angle.

The simulated setup is in the process of design, and will be constructed over the spring and summer, with the first test planned for January 2015, NASA officials said.

Satellites of the future

Today's one-shot satellites aren't constructed for maintenance, but the SSCO is developing the technology to refuel them regardless. Such measures will allow for the life extension of satellites that would have to be retired due to a lack of fuel when they otherwise function,enabling companies and governments to save money on the development and launch of replacements.

When robotic refueling becomes common, satellites could be designed with maintenance methods in mind. Reed pointed to the Hubble Space Telescope as an example. Because it was designed for servicing, the maintenance — including tasks that were not originally intended to be performed — was "not easy, but more easy."

Resupplying propellant isn't the only thing that robotic servicing may one day accomplish. Satellites can also be upgraded by mechanical methods.

"The Hubble is two or three orders of magnitude more powerful now than it was when it was launched because of technology improvements on the ground," Reed said.

The scientific benefits of robotic servicing are potentially huge. A satellite with a 15-year planned mission could be launched into orbit with only seven years' worth of fuel, for instance, allowing more room for scientific instruments. If something goes wrong, the technology becomes obsolete, or the telescope is otherwise not slated to be continued after seven years, the satellite can power down when it runs out of propellant. But if the mission is continued, robotics can pump more fuel into its tank.

Another option is the ability of robotics to manipulate pieces of orbiting satellites. Today, telescopes are limited in size by the ability of rockets to carry them into space. If components could instead be separately launched and assembled by robots in space, it opens up the door for larger scientific instruments and other constructions.

Robotic refueling allows for extending the lifetimes of satellites of all types, and even increasing their power, effectively bringing down their overall price tags, Reed said.

"The advantage of doing such a mission would potentially allow, in these austere times, the possibility of extending the lifetime of incredibly valuable government assets," he said.